Today is day three of my most favourite week of the book blogging community- the Top Ten lists of 2012! This year's Top Ten of 2012 is hosted by Lisa from A Life Bound By Books, Jessica from Confessions of a Bookaholic, Jaime from Two Chicks on Books, Mindy from Magical Urban Fantasy Reads, and Rachel from Fiktshun!

*In no particular order*

1) Adrian and Sydney from "The Golden Lily" by Richelle Mead: I never thought it possible for me to love characters from Richelle Mead more than I love Dimitri and Rose, however, with each installment of this series I am realizing that it is entirely possible.

2) Noah and Echo from "Pushing the Limits" by Katie McGarry: Broken girl and bad-boy. Could it get any more perfect than that?

(Image credit)
3) Four and Tris from "Insurgent" by Veronica Roth: Bad-ass and bad-assier (and what is perhaps best about this coupling is that Tris, the female, is the bad-assier one).

(Image credit)
4) Tamani and Laurel from "Destined" by Aprilynne Pike: I had waited FOUR BOOKS for this to happen! So I was obviously excited when it finally did.

(Image Credit)
5) Daemon and Katy from "Onyx" and "Opal" by Jennifer L. Armentrout: What can I say about these two, expect for that they are obviously the hottest couple in YA? 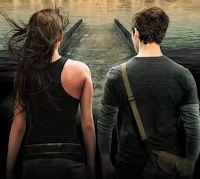 6) Samm and Kira from "Partials" by Dan Wells: Okay, so they aren't technically a couple but.... THEY TOTALLY SHOULD BE!

(Image Credit)
7) Every Couple from "13" by Kelley Armstrong: There isn't a couple in this series that I don't like- from Clay and Elena, to Jamie and Jeremy, to Hope and Karl, and beyond!

(Image Credit)
8) Noah and Mara from "The Evolution of Mara Dyer" by Michelle Hodkin: As I said in my review their love is totally dysfunctional, but I wouldn't have it any other way.

(Image Credit)
9) Maggie and Andrew from "Lucid" by Adrienne Stoltz and Ron Bass: I can't remember a time when I rooted for two characters to be together as much as I did with these two.

(Image Credit)
10) Nastya and Josh from "The Sea of Tranquility"   by Katja Millay: A broken girl and the boy who, despite the force field of death around him, puts her back together.
Posted by Avery at 12:00 AM