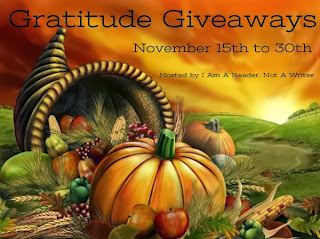 Today I'm excited to participate in my first blog hop! What's up for grabs? Winner's choice of one of a premade design from Avery's Designs (plus installation*, for those who require it)!

What exactly is Avery's Designs? It's a blog design service that I recently launched which focuses on making blog design easy and affordable!

Here are some examples of designs that the winner can choose from:

Don't have a blog/ not in need of a blog design? Have no worries! The prize can be substituted for the winner's choice of a book $10 USD or less from The Book Depository!

Don't forget to enter all of the other amazing giveaways!

From Goodreads: "Lex is a teenage Grim Reaper with the power to Damn souls, and it’s getting out of control. She’s a fugitive, on the run from the maniacal new mayor of Croak and the townspeople who want to see her pay the price for her misdeeds. Uncle Mort rounds up the Junior Grims to flee Croak once again, but this time they’re joined by Grotton, the most powerful Grim of all time. Their new mission is clear: Fix his mistakes, or the Afterlife will cease to exist, along with all the souls in it.

The gang heads for Necropolis, the labyrinth-like capital city of the Grimsphere. There, they discover that the Grimsphere needs a reboot. To do that, the portals to the Afterlife must be destroyed…but even that may not be enough to fix the damage. Things go from bad to worse, and when at last the fate of the Afterlife and all the souls of the Damned hang in the balance, it falls to Lex and her friends to make one final, impossible choice."

"Croak", the first book in this series, was one of those books that completely took me by surprise, I had expected it to go one way, but it went in the complete opposite direction. However, I wouldn't have had it any other way- I think that it is extremely refreshing for the world of paranormal YA, especially for what we've seen from Grim Reapers stories thus far. That being said, I do think that a lot of magic from the first book was lost on the second, "Scorch". I thought that it was a bit too "out there" for my liking, making it extremely unrealistic and unrelateable. Though that didn't deter me from picking up this book, thinking that I was just suffering from a small bout of 'second book syndrome'. However, while a bit of magic was restored from the first book in the series, it wasn't as much as I would have liked.

My biggest complaint about this book was, again, how much was going on, especially within the first couple of chapters. Despite not having read the second book all that long ago, I, for the life of me, couldn't recall anything that had happened in the previous (because, again, so much occurred in it). It took me a LONG time to finally situate myself in this, being disoriented/ struggling to regain my bearing for much of it. It isn't often that I think that the first chapter of a book should recap what happened in the previous, however, I think that this series is the poster child for that.

That being said, the character growth in this series (especially this book) and the ending redeemed the book in my eyes more than I would have ever thought possible. While I had never expected this book to end the way that it did, I do think that it is perfect (plus, I love how there was a spark, no pun intended, of hopefulness). Furthermore, it's something that we don't often see in YA especially and, for that, I applaud Gina immensely.

All in all, I highly recommend this series for those looking for something different in YA paranormal- something which more so focuses on quirkiness and humor than tradition (though which does know how to be serious when the situation calls for it). I personally cannot wait to see what Gina has up her sleeves for us next (namely which paranormal beings she will tackle next).

I received this book from the publisher to read and honestly review. I was not compensated in any way for said review.
Posted by Avery at 12:00 AM 10 comments

I received this book from the publisher to read and honestly review. I was not compensated in any way.
Posted by Avery at 12:00 AM 11 comments