ARC Review: "The Coldest Girl in Coldtown" by Holly Black

From Goodreads: "Tana lives in a world where walled cities called Coldtowns exist. In them, quarantined monsters and humans mingle in a decadently bloody mix of predator and prey. The only problem is, once you pass through Coldtown’s gates, you can never leave.

One morning, after a perfectly ordinary party, Tana wakes up surrounded by corpses. The only other survivors of this massacre are her exasperatingly endearing ex-boyfriend, infected and on the edge, and a mysterious boy burdened with a terrible secret. Shaken and determined, Tana enters a race against the clock to save the three of them the only way she knows how: by going straight to the wicked, opulent heart of Coldtown itself.

The Coldest Girl in Coldtown is a wholly original story of rage and revenge, of guilt and horror, and of love and loathing from bestselling and acclaimed author Holly Black."

Holly Black is, without a doubt, one of those authors who shaped my teenage years, specifically with her "Modern Faerie Tale" series- I literally cannot tell you the number of times that I reread those books growing up. However, I unfortunately wasn't a huge fan of her "Curse Workers" series, while the concept was unique, I didn't find that it grabbed me in any way, shape, or form. That being said, when I heard about this series (and saw all of the glowing reviews from my fellow reviewers), I did decide to give Holly another chance, something that I am not oft to do. Admittedly I am somewhat regretful for doing so as I once again found this series flat, not having the slightest bit of magic that I had become familiar with in her faerie series.

The first complaint that I have about this book is vampires. I am of the opinion that vampires are dead in young adult literature unless you REALLY have something that the likes of has never been seen before. Unfortunately the vampires of this book are no different than any other vampires I have seen in the genre. In fact, the vampires of this book are perhaps the most stereotypical I have ever seen before- with questionable fashion choices (poofy sleeves and slicked backed hair), brooding attitudes, and so forth.

The next complaint is the utter detachment I felt about the plot, characters, and so forth. I felt like much of the plot was overly melodramatic, but it was lacking in any REAL emotion. Characters seeing people being ripped apart in front of their very eyes? Meh. Characters declaring their undying love for one another? *Shrugs*. Any who knows me knows that I LOVE love, however, I felt that the relationship between Tana and Gavriel to be so forced that I didn't even care whether they had one or not.

That being said, I really did the character of Aiden, Tana's ex-boyfriend. I thought that he brought a lot of light-heartedness and humour to the book. Furthermore, despite the book's size, a solid inch and a half or two inches in thickness, I did find that it was an extremely quick read, having finished it almost as soon as I had started it.

All in all, unfortunately the book didn't do it for me, after finishing it having little to no feelings about it- except for the satisfaction of being able to add another tick to my count of books read this year. That being said, with this book being a combination of "The Immortal Rules" by Julie Kagawa and "Blood Red Road" by Moira Young, I do think that it will appeal to a lot of readers. Furthermore, despite my complaints, I do think that I will continue on with the series, if only to see how it ends.

I received this book from the publisher to read and honestly review. I was not compensated in any way for said review.
Posted by Avery at 12:00 AM 3 comments

"Addicted To You" by Colina Brennan

From Goodreads: "When twenty-one-year-old Leah Carter's latest one night stand burglarizes her apartment, her roommate forces her to attend therapy for sex addicts. Leah insists she isn't a sex addict; she just doesn't do relationships. After all, sooner or later, everyone lets you down.

At first, the group sessions are little more than an education on how to be promiscuous. Until she meets the newest addict—blue eyes, killer body, and a smile that tempts relapse.

Psychology student Will McLean is posing as a fellow addict while researching a case study on unusual addictions. But the more he learns about Leah, the more certain he is that his desire to break through her walls and unearth her secrets has nothing to do with his assignment.

As the uncertainties spike alongside the sexual tension, the only thing Leah knows for sure is that falling in love would be disastrous. Too bad love might be one addiction she can't kick."

Being a New Adult addict, it isn't too, too often that I become truly excited about a new release in the genre, finding many titles to be extremely similar to one another. That being said, when I heard about the premise of this book, quite unlike any I have encountered to date, and heard of a number of some of my most critical friends raving about it, I did find myself growing increasingly more and more excited about it. That being said, after finishing it, I can't help but feel extremely disappointed.

My largest complaint about this book is what I like to call the 'memorability factor'- I know that days from now, if not hours after finished it, that I will remember very little of the plot, if any. In a sea of New Adult titles being released each and every day, I unfortunately don't find that this book has what it takes to float above the rest- a broken girl with a questionable past, a family who doesn't understand her, somewhat prudish best friends, and so forth.

That being said, I do appreciate that the lead male, Will, is a fair bit different than any boy that I have encountered in the genre to take- not being the stereotypical 'bad-boy', with tattoos dripping down his six pack. He's golden, and light, and brings legitimate goodness to the book.

All in all, while I think that this book had loads of potential, it, unfortunately, did not live up to it whatsoever. However, I don't regret reading it as it was an extremely quick read (and provided a few hours of entertainment) and it is one of the hottest New Adult that I have read to date, without being lewd. I do think that Colina has a lot of talent for writing within the genre and I do look forward to seeing what she comes up with next!

I received this book from the tour host to read and honestly review. I was not compensated in any way for said review.
Posted by Avery at 12:00 AM 4 comments

As you may have noticed, I have somewhat dropped off of the face of the planet over the last month or so when it comes to the blog (not Twitter though, I can never quit my Twitter)- with school, work, and real life getting in the way.

Well, today I am excited to announce that I am once again back to blogging. I am officially done school for forever (or until I get bored with life and decide to go back and get my masters in archaeology) and am a librarian (albeit an unemployed librarian) and I'm "taking it easy" until I find a grown-up job.

I can't wait to once again dive into reading and reviewing! Also, I must thank y'all for sticking with me during my unexpected hiatus!
Posted by Avery at 12:00 AM 3 comments 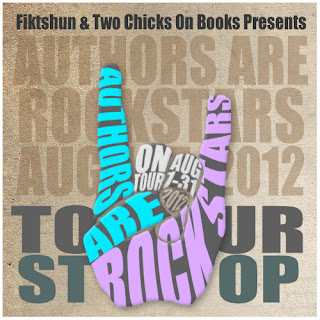 Today I am beyond excited to have Chloe Neill, one of my most favourite authors, stop by the blog for part of the Authors are Rockstars tour. In case you are unfamiliar with Chloe, she is the author of the "Chicagoland Vampires" (adult) and "The Dark Elite" series (YA).

Why do I think that Chloe Neill is a Rockstar Author? Let me count the ways:

Are you convinced to read these books yet? If not, perhaps Chloe herself will be able to in our interview!

The eighth book of your Chicagoland Vampires series is soon to hit shelves- how does that make you feel? Do you get as excited with each new release as you were with the release of "Some Girls Bite"?

I think it's much less surreal now than it had been when SOME GIRLS BITE was released, but there's absolutely always that sense of excitement and anticipation. I really love Merit, and I hope others enjoy her stories, as well.

With eight books in the series under your belt, and two more planned, how do you keep the story lines fresh?

I try to keep my mind fresh. I read, watch television, keep up with graphic design and fashion, love American history. I think diving into all those various subjects gives me tidbits to include in the books.

I think that a lot of readers, female especially, will agree that Ethan is their most favourite of the series- who is your favourite character?

Interesting question. Ethan is definitely one of the easiest to write. His voice is very distinctive, so it's easy for me to imagine his diction. Jeff is another favorite, because he's so noble and honorable. People don't give him enough credit because they see him as a "geek." He is that, and many other things, too. Merit has a lot of me in her, so it's less that she's a "favorite" than "part of me." :)

On the note of favourites, what is your most favourite of the supernatural beings? If you had to be one type of being, which would you choose?

I would like to be any type of being that could fly. It's my preferred secret power. :) Beyond that, probably a vampire.I'd miss the sun, but immortality and strength are pretty good.

Both of your series, Chicagoland Vampires and Dark Elite are set in Chicago. What does the city mean to you? Why feature it so prominently?

It's a city of contrasts, which I find really, really interesting. Great food, amazing architecture. But also poverty and crime. It's a city with meat on its bones, and there's always something I can use to make the CV books pop.

Ethan or Morgan? Ethan, always. There's something odd going on with Morgan.
Monsters under the bed or monsters in the closet? Under the bed alligators.
Adult or YA? Adult, although I'm reading mostly nonfiction right now.
TV or film? TV. I rarely watch movies. I have a miserably short attention span. :)
Starbucks or Diet Coke? DIET COKE. In large quantities. :)

Special thanks to Jamie and Rachel of Rockstar Book Tours and Chloe Neill!