So you may have seen on Tuesday that I posted my "Teaser Tuesday" featuring a couple of sentences from this book... And I just finished it so I thought I would share my thoughts with you about how well I think it fared. 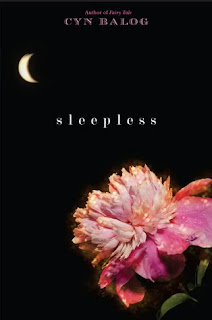 "Eron DeMarchelle isn't supposed to feel this connection. He is a Sandman, a supernatural being whose purpose if to seduce his human charges to sleep. Though he can communicate with his charges in their dreams, he isn't encouraged to do so. After all, becoming too involved in one human's life could prevent him from helping others get their needed rest.

But he really cannot deny that he feels something for Julia, a lonely girl with fiery red hair and sad dreams. Just weeks ago, her boyfriend died in a car accident, and Eron can tell that she feels more alone than ever. Eron was human once too, many years ago, and he remembers how it feels to lost the one he loved. In the past, Eron has broken rules to protect Julia, but now, when she seems to need him more than ever, he can't reach her. Eron's time as a Sandman is coming to a close, and his replacement doesn't seem to care about his charges. Worse, Julia is facing dangers she doesn't recognize, and Eron, as he transitions back to being human, may be the only one who can save her...


Even once they've become human again, Sandmen are forbidden to communicate with their charges. But Eron knows he won't be able to forget Julia. Will he risk everything for a chance to be with the girl he loves?"

Okie dokie, so I was pretty excited to read this book, one, because it is a really short read (213 pages) and I have been super busy with exams and whatnot and two, because it deals with Sandmen and I don't know of any other fantasy/paranormal story that features them (if you know any feel free to recommend them!). I just thought that it was great that Sandmen were the fantastical beings of this story since vampires and werewolves have been so overplayed lately and its just sort of refreshing. However, now that I look back at the book I realize that I am kinda disappointed by it.


I found it to be very much a mindless teen girl novel and I'll be honest, I don't mind mindless teen girl novels (aka Simon Pulse Romantic Comedy books), but with this I was just expecting it to be a bit more serious, especially with that blurb inside the cover- it made everything out to be so epic, "Julia is facing dangers she doesn't recognize" (I could hear DUN-DUN-DUNNNN!!! throughout my head as I was reading the cover), and then what takes place in the book isn't all that epic at all. The dangers she faces? A jealous dead boyfriend hellbent on making sure that she never forgets him. It just doesn't seem to be all that epic and something that can be fixed pretty easily. Or when the cover states, "In the past, Eron has broken rules to protect Julia, but now, when she seems to need him more than ever...", ummmm wrong! She doesn't really mention at all feeling alone, considering that her boyfriend's best friend, Bret, is with her pretty much her "hip tumor" throughout the entire novel, trying to hook up with her ASAP and her mom, who completely understands her daughter and her feelings without even having to be told, is there for her every step of the way also. So how can you be lonely?

And speaking of that cover blurb, it's slightly incorrect or misleading. It makes it out to seem that Sandmen are whatsoever not allowed to see their charges once they become human or there will be some serious consequences, however, I think that this is only mentioned in maybe one sentence in the book? And Chimere, one of the "head hancho" Sandmen, knows that Eron is visiting his charge Julia throughout the book, in both her dreams and real life, and she never once reprimands him for doing it, so yes, that "important" Sandmen rule isn't really carried out whatsoever.

I think that the only saving grace of this novel is Eron, he is super sweet and concerned about Julia (plus he's hot, who doesn't love a hot boy ;) )... And he is a good boy! It isn't often that I actually like the good boy character of a book ***cough, cough, case in point Jace, the ultimate bad boy***.

So yes, though there are some parts of the plot/ story in general that are pretty questionable, it is an okay read (that is, an okay read if you have nothing else to read, or if you don't have a very long time to read something- like I mentioned it is pretty short). Would I go out and buy it? Nope. Would I reread it? Probably not (which is quite a shocker since I pretty much reread anything as soon as I read it for the first time). So check it out from the library! I do think I will try and find a copy of Cyn's "Fairy Tale" though (but from the library, I ain't going to buy the baby).

BTW: Another red-headed character to add to the list!
;)
Posted by Avery at 6:38 PM