On Sunday Maggie stopped by London, Ontario for her Forever Tour. This was exciting because I essentially live in London (and I had the day off of work) so I could actually attend it! It was further exciting because it was my first EVER book signing.

*Note: When I got to the bookstore I realized that I had forgotten my digital camera memory card in my computer, the memory card that I had spent all morning cleaning up so I would have lots of room for pictures and videos. I wasn't all that concerned because I figured that I could just load pictures directly off of my camera to my computer. Not so much. All but one of the pictures were corrupted and wouldn't let me download them to my computer, however I was able to take cell phone pictures of a few of the pictures on my digital camera (how is that for ingenuity? ;) ).

Because it was my first signing I wasn't quite sure how a signing went so I dragged my sister to the bookstore about two hours before the signing began (thank gosh I did so because by the time the signing started the few seats that they had out were filled and everyone else had to stand- fifty or so people standing I would guess). And I am not quite sure how it happened, but I got in a conversation with two women sitting behind me and it turns out that one of them was Jen from Lost in the Library! AND a young girl sitting beside me was KC Graham from In The Words Of... It was really awesome talking to all of the ladies/ reassuring that I am not the only obsessed with books and blogging out there.

After a couple rounds of giveaways (I somewhat embarrassingly mispronounced NARKOTICA and missed out on a GC to the bookstore. Boogers!) Maggie came out to great applause and started telling us about how "Forever" came to be (she wrote the book and handed it in to her editor two weeks before the deadline, almost as soon as she did she realized that she absolutely hated it and rewrote it) and she answered some audience questions (people at first were quite hesitant to ask anything, but after one or two questions more started to roll in, ie. "What music inspired you to write?", "Why German poetry?", "Can I ride with you in Loki?").

After the Q&A session she drew the winner for her gorgeous Sharpie guitar (You can see the guitar on Maggie's blog).  Jen and I debated grabbing the guitar and making a run for it, but chickened out- unfortunately neither of us won it (or my little sister who I would have obviously stolen the guitar from). 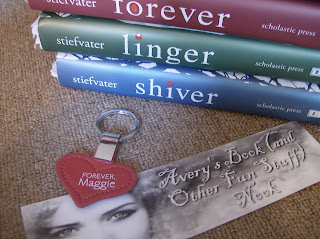 After the guitar drawing the signing then technically started. Because of where my sister and I were sitting we were actually at the front of the line. I nervously went up to Maggie and handed her my pile of books to sign. I totally had a fangirl moment and blathered on about how I loved "Forever's" shower scene between Grace and Sam and the dancing scene between Isabel and Cole. Apparently her editor thought that the shower scene was too goofy for the book, but I am really glad that it was included because I thought that it showed a different side of Grace's and Sam's relationship. She also asked me why I had a ton of little pieces of paper strewn throughout my books and I explained that they were all of the best/ most memorable portions of her books IMO and that I had been featuring those parts on my blog (I used some of them in my Take Two of "Shiver" and my Take Two of "Linger")- I then totally had a shameless promotion moment and handed her a bookmark that I had made that had all of my blog info on it. 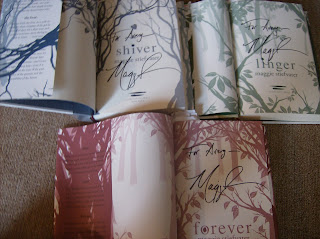 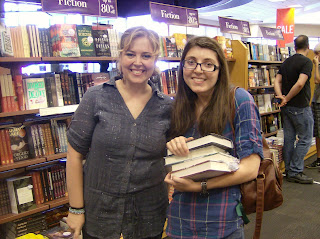 After stumbling away awestruck from Maggie I then wandered over to Tessa Gratton (I felt really bad that I have yet to read "Blood Magic", but it is totally going to the top of my TBR pile). Tessa seemed like an absolute sweetheart and I was really glad to have had the opportunity to have met her as well (The picture of Tessa and me, left, was the only picture I managed to successfully download- thank gosh it was that one and not the one I had accidentally taken of my elbow). 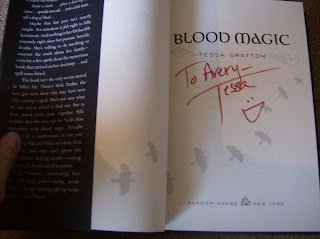 And my signed copy of "Blood Magic" 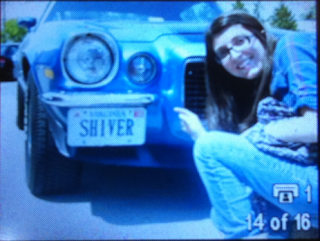 And as we we leaving I obviously had to get a picture of myself with (Blue) Loki! Maggie was super excited because the bookstore actually let her park Loki on the sidewalk in front of it. Look at that license plate!
Thing I learned from my first book signing:
1) Take a working camera with you. Heck, take twelve if possible. And a cell phone with a good camera in it. Better. Safe. Than. Sorry.
2) Make sure your little sister is well fed before you force her to take you to a book signing (if not she will become super fidgety and grumpy and will go MIA for quite a long time as she drives to the nearest fast food restaurant to stuff her face).
3) Try to reach out to fellow bloggers who may be attending a signing prior to it (special thanks to Liz over at Midnight Bloom Reads- she actually let Jen and myself know that we would both be attending the event).
Thanks goes out to Maggie Stiefvater, Tessa Gratton, and Chapters (Wellington location)!
Posted by Avery at 12:00 AM