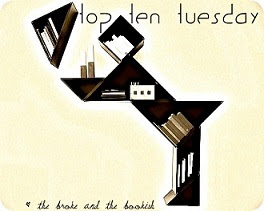 Top Ten Tuesday is an original feature/weekly meme created by The Broke and the Bookish.

"Evernight" series by Claudia Gray: Okay, so admittedly the last two covers aren't too, too bad. But the first two? When I first saw these books I had two thoughts: A) What in the world is supposed to be depicted on these covers and B) How the heck does that pertain to the story contained within. The answer? It doesn't. There is nothing about the covers that says, "Hey! This is a really kick-ass vampire/ wraith story!" 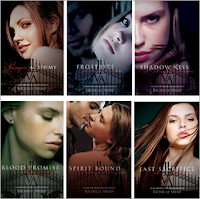 "Vampire Academy" series by Richelle Mead: I can't pinpoint exactly what I dislike about these covers because I essentially dislike everything about them- well, the gate is kinda cool I guess. I hate that they didn't use the same model on all 6 covers- I mean, the first girl kinda looks like a younger version of Angelina Jolie, no? Dimitri looks super creepy looking over Rose's shoulder in the second (or is it Christian and Lissa? Regardless, it's creepy). And yeah. There is just no consistency with the covers, which is a shame.

"Deity" by Jennifer L. Armentrout: It took me a really long time to figure out what was on the cover of this book. Like a REALLY long time. Once I figured it out (it's a neck), well, I was even more so confused. I just don't understand this series covers whatsoever, I don't think that they pertain to the story whatsoever (though I will admit that it has been a while since I last read the books and may have forgotten things)- but this cover? Yeah, it takes the cake as the worst of the series covers (sorry Jennifer!).

"Shift" by Jeri Smith Ready: So, I don't like the original covers of this series or the newly updated covers. I've heard that they updated the covers so that it pertained more to the story, but I don't think that it does in the slightest. I mean, how do these covers look like any other book cover in the world of YA right now? They don't. These covers don't give you any indication that this is a ghost story, If I had to choose, I'd say I prefer the original over the updated.

"After Obsession" by Carrie Jones: This cover looks like something I could make on Paint or a similar program- which is terrible since I am basically the most technologically challenged person EVER and possess no basic graphic design skills.

"Tris and Izzie" by Mette Ivie Harrison: When I first saw this cover my jaw-dropped, I was utterly and irrevocably in love and HAD to read this book. But this book? Yeah, one of the most disappointing books I have EVER read- in fact, it might just be the worst. Thankfully I received a copy of this book for review, had I bought it myself at the bookstore based upon the cover (which I am know to do), I would have been extremely disappointed and probably would have taken it back.

"Possess" by Gretchen McNeil: This cover is creepy, which I suppose is good because it matches the book in that fact (seriously, the room of dolls? *Shudders*), but I don't think that this cover , like many others I have mentioned, gives you any indication of what this book is about. In my opinion it kinda looks like she has tree branches or roots on her face, which would lead me to believe that she maybe possess the ability to manipulate said plants, or something along those lines- I would never, in a million years, guess that this book was about demons.

"Wolfsbane" by Andrea Cremer: If I were to see this cover without knowing what it was about, I would assume that it was an adult PNR or UF- and I would be WRONG. This is a YA werewolf story. I feel like this cover is so stereotypical and doesn't jump off of the shelf whatsoever (versus the original covers which are my most favourite book covers of all time- *Shakes first at those people who thought it would be a good idea to change the covers*).

"Blood Magic" by Tessa Gratton: It took me almost a year to read this book because in no way, shape, or form, was I inclined to based upon the cover. I understand what the designer was trying to do with this cover, but I just don't think that it met the mark.

"Halo" by Alex Adornetto: Like with "Tris and Izzie" when I first saw this cover my jaw dropped. I rushed out and bought the book and the book? Ugh. It was also one of the most disappointing books I have ever read before.
Posted by Avery at 10:37 AM