Today I am excited to be a part of the cover release of fellow Canadian M.R. Merrick's latest novel, "Release", the third book in his "Protector" series, which will be released on December 10th, 2012! 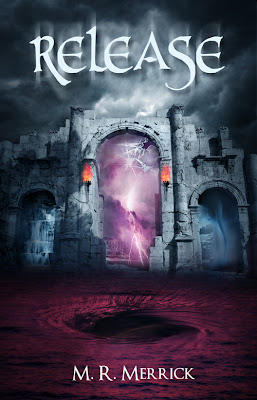 "After uniting the shifters and calling in reinforcements, Chase has to face his toughest challenge yet: learning to control his emotions. But as tensions rise and his powers grow, controlling his emotions becomes the least of his problems.

Terrorized by a multi-shifter who is hell-bent on turning him, Chase questions just how far he’s willing to go to stop his father. Meanwhile, Tiki’s virtuous nature has placed him in the middle of Vincent’s past, leaving Chase to oppose a senate of vampires and defend a demon he hates.

Trying to balance his friends, his enemies, and his inner demons, Chase is left searching for answers about the Mark, his destiny, and where he can find the next soul piece. Stopping Riley is his top priority, but as more obstacles arise, he finds himself doubting all the decisions he’s made - especially regarding Rayna.

What do you think of the cover? Besides loving the purple I'm totally intrigued!
Posted by Avery at 12:00 AM