As many will know by now, Marissa Meyer is one of my most favourite authors of all time (evidenced by me proposing to her on Twitter. I challenge YOU to read "Scarlet "and not want to propose to her. Or Wolf. Seriously, it's not possible). Therefore when I heard that she was coming to Toronto and that I WAS GOING (with the ever fantabulous Ashley and her mother) you can guess that my reaction was something along the lines of:

And then, when I had learned, that not only had Ashley won a one-on-one interview with Marissa, but had asked that I accompany her? Well...

Fast forward to the day of the event. Up at 6:30 am (I have seriously never woken up so quickly in my life, somehow within literally a minute I was out of bed, across the house in the bathroom and brushing my teeth), leaving here at 7:00 am, at Ashley's at 8:00 am, at the Chapters/Indigo at Yorkdale Mall around 10:30 am-ish. As soon as we got to Chapters we happened to stumble over the Ottawa Bloggettes, comprising of Ciara, Emilie, Meaghan, and Katie, and then the Toronto ladies, including Ardo, Michele, Tiff, Christa, Giselle, Liz, Siobhan, and more (seriously, there was a LOT of us bloggers there, I wanted to rename it "Blogsquad Meet-Up: Spring Edition").

There was almost the perfect amount of people there, IMO. Enough where I thought that it was worthwhile for the author, publisher, and bookstore, but where it wasn't overwhelming/ stifling (not unlike my only other experience at Yorkdale, at the Cassie Clare signing in the fall ,where it was SO busy that many of us were turned away at the door).

After talking to the girlies for about an hour Ashley and I then decided we'd better figure out where the interview with Marissa was taking place. After talking to an employee we were herded to the backroom of Chapters to wait until  Chandra from Indigo Teen Blog (and her partner in crime Natalie) finished their own interview. During that time we met Dan from Raincoast and Marissa's husband (who was kind enough to offer us Captain Thorne buttons and baked goods).

After Chandra and Natalie wrapped up their interview it was our turn. Admittedly I am an extremely anxious person, shaking, stomach aches, the whole nine yards, when it comes to being in what I perceive to be uncomfortable situations (public speaking, interviews, talking to people I don't know, etc.), but let me tell you, as soon as I met Marissa all fears that I may have had VANISHED- she completely put me at ease. Saying that she is personable is beyond an understatement. Ashley and I interviewed for her for twenty minutes, asking her such things as who her book boyfriends are, if she has any other books in mind/ in progress,  and if she could change one thing in her books what it would be. Oh, and we may have played the "Kiss, Kill, Marry" game. 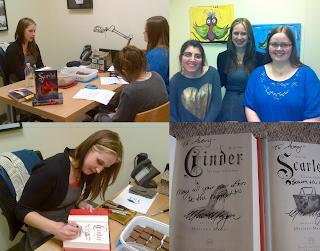 Left to right: Ashley and I interviewing Marissa (you can see the baked goods), Me, Marissa and Ashley (I hate pictures, btw), Marissa signing my books, and said books. Image credits to Indigo Events, Ashley and myself.

After wrapping up the interview it was then time for the talk/ Q&A (Raincoast/ Chapters was kind enough to save us some seats in the front row of the event). Marissa started off her talk by summarizing the books, she then discussed where her inspiration came from/ what made her first begin to write (basically, Sailor Moon + fanfic + the opportunity for a walk on role of "Star Trek"). Furthermore, the woman affirmed the fact that she  is a rockstar- her agent submitted "Cinder" on a Friday and by Monday she had offers from said publishers.

She then proceeded to tell us stories of Cinderella, Rapunzel, and Snow White quite unlike many of us had never heard before (who knew that there were fairytales far grimmer than the Grimm Brothers'?)- basically, they were bloody and no one survived with their eyes intact (also, one of the most hilarious things I have ever encountered before, but also kinda not... The stage was RIGHT beside the children's section of the bookstore. In fact, during the signing children were running back and forth in front of the stage. As Marissa was telling her gory stories the kids were standing there listening and THEIR PARENTS WERE LETTING THEM. I'm fairly certain that they're traumatized. But I think that it will work out for our benefit because they will be future YA readers, looking for something twisted/ different to read, not unlike Marissa's books). 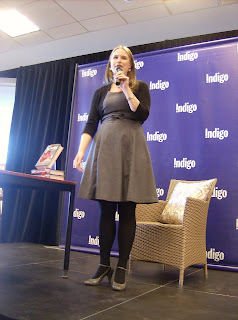 Marissa regaling us with gory fairytales.

Speaking of eyes... I have to share Marissa's version of Rapunzel as I have a theory about what is going to go down in "Cress" based upon what she said (not necessarily spoilery if you have yet to read "Scarlet"):


Basically Rapunzel's parents pawned her off to a witch after the witch gave her mother lettuce (her mother was craving lettuce while she was pregnant with Rapunzel. Also, curiously, both Cress and Rapunzel are types of lettuce). The witch locked Rapunzel into the typical tower where Rapunzel grew her long hair.

One day a prince, as they do, was walking through the forest when he stumbled on Rapunzel's tower. After climbing her hair, Rapunzel and the prince soon fell in love. One day when the witch went to visit Rapunzel Rapunzel said something stupid along the lines of, "Gawd, mom- You're so much heavier than the prince!"

Realizing the implications of what Rapunzel had said, and the fact that Rapunzel was looking a fair bit rounder (PREGGOS), the witch, out of anger, cut off Rapunzel's hair and threw her into a desert. Unaware of this, the prince went to visit Rapunzel once again. After climbing her hair the prince came face-to-face with the witch, where she then proceeded to push him out of the window.

The prince landed in a thorn bush where he was then blinded. Now blind, the prince wandered around until one day he happened across the desert where Rapunzel had been stranded. The two eventually find one another and Rapunzel cries into his eyes, healing him.


So what am I thinking?


THAT THORNE AND CRESS FALL IN LOVE!

And since I love, love, this makes me ecstatic. PLUS, if this is true than we have to assume that Cress is a firecracker if she is able to keep up with Thorne.

So, yeah. Agree? Disagree? Have your say over on Goodreads!

After Marissa was finished with her fairytales she then took audience questions- the best one, in my opinion, was when an audience member asked if she wrote her books solely with shipping in mind (whoever you are, I LOVE YOU). Marissa said that her goal as an author is to entertain and to write strong female characters.

After an amazing 45 minute long talk/Q&A it was then time for the signing. Since Ashley and I had already gotten our things signed we were good to go. After waiting for the other gals (Ciara, Emilie, Meaghan, Katie, Ardo, Michele, Tiff, Christa) to get their books signed we then went out for lunch. While I love author events I gotta admit that hanging out with the girls may be just as much fun (hanging out with them *almost* makes me want to move out of my parents house and move to Toronto). 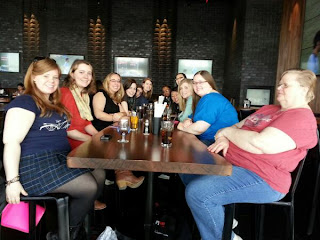 All in all, as becomes evident, I had an AMAZING time. Huge thanks goes out to Marissa, Chapters/ Indigos, Indigo Events, Raincoast, and Ashley (for being the best book BFF ever)!
Posted by Avery at 12:00 AM