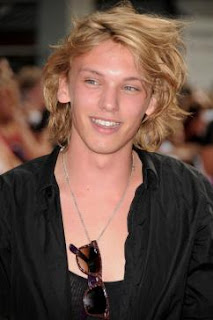 As y'all have probably guesstimated by now (since I am always going on and on about it) Cassie Clare's "Mortal Instruments" series is my most favourite book series of all time therefore I am beyond excited to announce that Jace Wayland (aka the most swoon-worthy boy of all time) has been cast in the film adaptation!

At first I was totally Team Alex, but after a couple of months of negotiations I started to realize that the reality of him becoming Jace was pretty slim. Therefore when names like Max Irons, Jamie Campbell Bower, and the likes of were thrown around for the role of Jace, Jamie quickly became the frontrunner in my mind (especially after seeing Max Iron's kinda cruddy role in "Red Riding Hood"- seriously, did he say more than 10 words in that film?) because well.... Look at him! I can totally picture him as Jace! And I personally feel that he looks quite a bit younger than Alex (remember Jace is only supposed to be 16 in the books/ film and if they were to make every book in the series- 6 in total- they wouldn't want him to look all that old right off the bat, they would want him to grow throughout the films a la "Harry Potter" actors).

Anyways, what are your thoughts? Do you feel, like I do, that Jamie makes a perfect Jace?
Posted by Avery at 9:44 PM