ARC Review: "If I Die" by Rachel Vincent 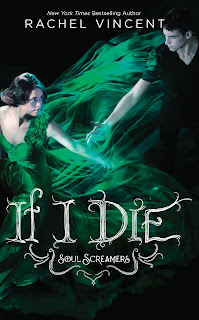 From Goodreads: "No one wants to be this teacher’s pet . . .

Everyone else is talking about Eastlake High’s gorgeous new math teacher, Mr. Beck, but Kaylee Cavanaugh has bigger things on her mind. Kaylee’s a banshee—her scream is a portent of death.

But the next scream might hit too close to home. Kaylee’s borrowed lifeline has almost run out.

Yeah—it’s a shock to her, too. So to distract herself from her own problems, Kaylee is determined to defend her school against the latest supernatural threat. That hot new teacher is really an incubus, who feeds from the desire of unsuspecting students. The only girls immune to his lure are Kaylee and Sabine, her boyfriend’s delinquent ex-girlfriend. Now the unlikely allies have to get rid of Mr. Beck…before he discovers they aren’t quite human either.

But Kaylee’s running out of time, and those who love her will do anything to save her life.

Soul Screamers: The last thing you hear before you die."

It is inevitable people are going to be heartbroken by this book because Kaylee has to make some really serious and life-changing decisions to make.  That being said, the heartbreak that you are bound to experience while reading this book doesn't make you dislike the book one bit, if anything, it makes you love the world that Rachel has created even more than you thought possible.

I found that Kaylee really started to come into herself in "My Soul to Steal" (becoming a strong, independent female who wasn't afraid to stick to her guns) and she became even more so in this book, which made me like her all the more. Furthermore, while I really liked Tod in the earlier books I found myself falling even harder for him in this book. Where he was geeky and cute in the earlier books he was totally hot and swoon-worthy in this book (seriously, the whole random swirly eye thing, the over-protectiveness, and the rumbly/ lower octave voice thing going on, I don't know how a girl couldn't fall for him)! Also, I found myself really liking Sabine in this book (well, the first half more so than the second half), her life situation is pretty cruddy (being born a mara- aka a living nightmare) and therefore you cannot help but feel for her and overlook the fact that she is a conniving booger. As for Nash? Well, it should come as no surprise (based upon my reviews of the earlier books), but I have never been a fan of him and therefore (as horrible as this may sound) I wasn't at all saddened by his outcome in this book- dare I say it? I was quite happy with  his outcome...

Thank you so much to Harlequin Teen for providing me with this book and special thanks to Lisa!

I received this book from the publisher to read and honestly review. I was in no way compensated for my review.
Posted by Avery at 12:00 AM