"My Soul to Take" by Rachel Vincent 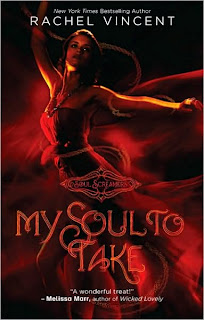 From Goodreads: "She doesn't see dead people, but she senses when someone near her is about to die. And when that happens, a force beyond her control compels her to scream bloody murder. Literally.

Kaylee just wants to enjoy having caught the attention of the hottest guy in school. But a normal date is hard to come by when Nash seems to know more about her need to scream than she does. And when classmates start dropping dead for no apparent reason, only Kaylee knows who'll be next."


As many of you have probably garnered by now, Rachel Vincent is tied as my favourite author of all time, I practically worship her “Shifters” series, however, this series, “The Soul Screamers” series, does not compare to the “Shifters” series whatsoever. That is not to say that this series is bad by any means, I think that it is an awesomely unique take on a magical race that few, if any, other authors have written about, but I personally prefer the other series more. I should make note that Rachel is not alone in this, I love to death my other favourite author’s (Cassie Clare’s) one series (“The Mortal Instruments”), but I don’t enjoy her other series near as much ("Infernal Devices” series).  I will also make note that sometimes when I am entirely wrapped up in a book genre or a series I do find myself being overly critical of everything else I read (aka because I love the “Shifters” series and because both series are written by the same person I cannot stop myself from constantly comparing them and nitpicking- even though I need to understand that the “Shifters” series is an adult series, whereas this series is a YA series so obviously there are going to be differences due to the audiences).
After reading this book I have come to realize that I am very pro-underdog. Nash, the smooth popular boy does not do anything for me at all (well that is a lie, he does do something for me, just in the wrong way, he makes me dislike him- a lot), whereas Tod, his lonely undead brother (definition of an underdog) very much pulls on my heartstrings.  I don’t know what it is about Nash that makes me dislike him so much (well that’s a lie, I don’t like him because he is a player, is too arrogant/ cocky and is just one of those boys who seems to get everything that he wants- mainly in the way of girls), but his character just doesn’t sit right with me- however, as I sit here and write this review, I can slightly (which I hate to admit) understand where he is coming from. Imagine knowing that you are a member of a magical race whose population is few and far between and whose members live for an extremely long period of time, surpassing all of their human friends and families by hundreds of years. It must be difficult for you to know that finding a partner of your race, who you could spend years upon years with, would be extremely difficult, if not darn near impossible. So what do you do? Do everything in your power to forget about this and what does this mean in Nash’s case? Hook up with human girls (and lots of them). But even with that understanding/ acceptance, I do still much prefer Tod over Nash. As for Kaylee? Well, I must applaud her for sticking to her guns and not wanting to be another notch on Nash’s belt for as long as she did, I am sure that most girls would have fallen into his lap as soon as he smiled at them, but she still eventually succumbed to his charms (UGH...)! Furthermore, I must applaud Kaylee for very much being a take charge kinda gal (my favourite), even if her decisions weren’t always the greatest and they sometimes placed her in more trouble, she was always more than willing to own up to them (eventually, kinda like good old Faythe).
The part of the book that I believe to be the most unexcusable/ unforgiveable? The fact that Kaylee’s aunt, uncle, and heck, even father, led her to belief that she was crazy when they knew and had accepted the truth all along- that she was a bean sidhe, like them. I just don’t understand why they didn’t tell her the truth from the beginning- okay, so it is explained in the book why they didn’t tell her, they didn’t want her to feel guilty about her mom’s sacrifice for her yada yada yada... But still! Nash and Tod knew from the beginning that they were bean sidhe and they still turned out fine (well, the jury is still out on those boys) ;) ! Kaylee is extremely strong and I don’t think that hearing the truth from the beginning would have done any irrevocable damage to her.
All in all, I do think that this is a great series for young adults (as it is written for), but I do feel like some adults may have difficulties relating to the teenage characters, their emotions, and whatnot (therefore check out Rachel’s adult series and pray that her new WIP adult series comes out soon!).
Rating: 7.5/10
Posted by Avery at 5:34 PM