"The Dark Divine" by Bree Despain 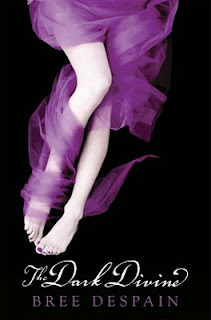 From Goodreads: "A Prodigal Son

Grace Divine—daughter of the local pastor—always knew something terrible happened the night Daniel Kalbi disappeared and her brother Jude came home covered in his own blood.

Now that Daniel's returned, Grace must choose between her growing attraction to him and her loyalty to her brother.

As Grace gets closer to Daniel, she learns the truth about that mysterious night and how to save the ones she loves, but it might cost her the one thing she cherishes most: her soul."

I did find the story to be quite slow in the beginning. I was (impatiently) waiting for anything exciting to happen and I did feel a bit let down when almost all of the action took place until the very end of the novel, leaving me with more questions that answers. Though this story isn’t the most unique take on werewolves, I didn’t find myself becoming tired with the story, thinking that it was too overplayed, so yay for that!

After reading this book I have come to determine that on the one hand I always want the girl and the boy to get together within the first 20 pages of so, so that the remaining 400 pages outline the crazy adventures that they experience together, but on the other hand, I want them to come together over a long period of time, getting to know one another without going through the stereotypical YA paranormal plotline (girl and boy meet, fall in love ASAP and vow to protect one another from everything that is a threat to them). I believe that the way in which Bree Despain went about this matter was perfect, since Grace and Daniel had known one another for years and previously had feelings for one another, and when their feelings did resurface quite quickly within the plotline, I didn‘t roll my eyes, shake my head, and mentally yell at the characters, “You have only known each other FOR TWO DAYS!!! Is it really necessary to be declaring your undying love for one another?” (my usual reaction).

In the beginning of the novel I found Jude to be extremely selfless and a character that was borderline swoon worthy, however my opinion of him soon drastically changed, with the introduction of Daniel. I found that Jude became extremely selfish. Everything that Grace did, she first considering how her actions would affect those around her, and then determined whether it was worth the risk, and in many cases she decided it was not worth upsetting someone, whereas everything that Jude did after the introduction of Daniel, he only did it for himself. Daniel is the first to admit that he is far from perfect, and I think that is why I like him so much and makes him relatable to the reader. He understands that what has happened in the past is in the past, and the only way to move forward is to try to correct his wrongdoings and I very much respect him for that.

Though it takes Grace a while to determine/ realize what she wants in life, once she does make this realization, she will do everything in her power to ensure that it remains in her life. Take Daniel, for instance, once she found out how she could save him, she could have run in the opposite direction, taking the easier path, like the majority of people would most likely do, but instead she chose the much harder path, that few, if any, would have took- sacrificing herself physically (and for all she knew morally) in order to free the boy that she loves from his curse, and for that I really admire her.

So all in all, I did enjoy this book. I think that the characters within this book are some of the more relatable characters that I have recently read, and though the action is so short and does take quite a long time to appear, it is well worth the wait, and of course I cannot wait to read the next book in the series, “The Lost Saint”, which comes out tomorrow (December 28th, 2010).