In My Mailbox is a weekly post hosted by Kirsti at The Story Siren as a chance to share the books we've bought or received over the past week.

This week has been a pretty exciting week for books! I ordered a bunch from Amazon for Christmas this past weekend and I was told that I wouldn't get them before Christmas, but lucky me! I got them 2 days after ordering them (so on Tuesday). I also have a bunch more ordered on Amazon, but they are darn pre-orders, so I should be getting quite a few more within the first week or so of January. 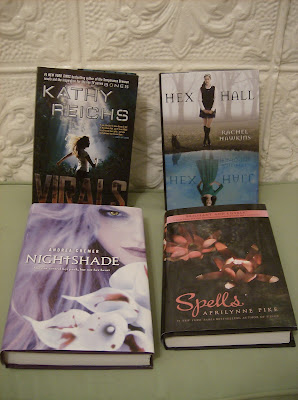 "Virals"  by Kathy Reichs- Bought (I just reviewed this yesterday- it was amazing)
"Nightshade" by Andrea Cremer- Bought (I reviewed this on Thursday, it was also a great read)
"Hex Hall" by Rachel Hawkins- Bought (I reviewed this a few weeks back and thought that it was the best book I have read in quite some time)
"Spells" by Aprilynne Pike- Bought (I love this book series so much, I had the previous book in the series, "Wings", but I had yet to get this one)
And the bestest thing I received in my mailbox this week?!? A friggin' ARC  of "My Soul to Steal" from Rachel Vincent! 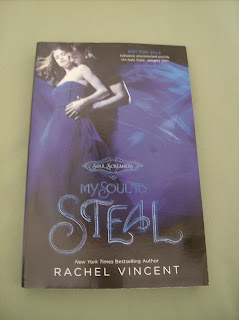 The best part of the ARC? It is signed! And she made it out to me! I know this isn't a big deal to all of you bloggers who are always in contact with authors and whatnot, but this was just so exciting to me. I just randomly started blogging one day a few months back, mainly so that I could remember what books I read throughout the year, and I never expected that I would start to receive books to review or win books in giveaways and whatnot (especially from my favourite author). So yeah, it was just so sweet (not going to lie, I had to blink back happy tears)... 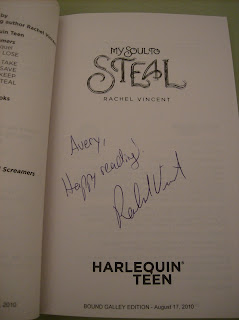 The back story: I was just randomly on Twitter 2ish weeks ago (when I was supposed to be studying for an exam... Shhhhh...) when I noticed that Rachel had stated that she was going to be holding a Twitter trivia contest within the next ten minutes in order to promote/ provide bloggers with her new novel from the "Soul Screamers" series, "My Soul to Steal". I hadn't read this series in quite some time, so I thought that I wouldn't be able to answer any of the question quickly enough, but after the first questions was asked it became apparent that each question would take a minute or so for Twitter followers to answer (and not the 5 seconds I thought it would take for each question to be answered). I quickly ran to my bookshelf and grabbed my copies of the series and when the next question was asked, I grabbed the book that the question pertained to and hunted for the answer. The first page that I turned to? Yeah, it had the answer dead smack in the middle of the page! Lucky me! Answered the question on Twitter correctly and won the book! Yay!!! Afterward, my heart was beating so fast from excitement... I thought I was going to have a heart attack. I now am going to reread the first three books of the series, review them, read this book and review it, all before January 6th, 2011...
Posted by Avery at 8:56 AM