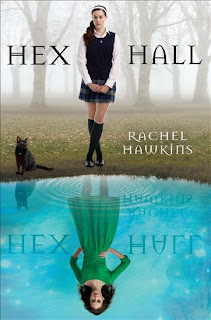 From Goodreads: "Three years ago, Sophie Mercer discovered that she was a witch. It's gotten her into a few scrapes. Her non-gifted mother has been as supportive as possible, consulting Sophie's estranged father--an elusive European warlock--only when necessary. But when Sophie attracts too much human attention for a prom-night spell gone horribly wrong, it's her dad who decides her punishment: exile to Hex Hall, an isolated reform school for wayward Prodigium, a.k.a. witches, faeries, and shapeshifters.

By the end of her first day among fellow freak-teens, Sophie has quite a scorecard: three powerful enemies who look like supermodels, a futile crush on a gorgeous warlock, a creepy tagalong ghost, and a new roommate who happens to be the most hated person and only vampire on campus. Worse, Sophie soon learns that a mysterious predator has been attacking students, and her only friend is the number-one suspect.

As a series of blood-curdling mysteries starts to converge, Sophie prepares for the biggest threat of all: an ancient secret society determined to destroy all Prodigium, especially her."

So I must say... FINALLY!!! A book worthy of ten stars! It feels like forever since I have read a book that I have liked as much as this (only one I an recall in quite some time is "Alpha" by Rachel Vincent, heck, even Cassandra Clare's [who I worship] "Clockwork Angel" wasn't all that great in my opinion.

Okie dokie, so now that I have gotten that off of my chest... On to the good stuff. When I first picked this book up and saw that it was a Disney book I rolled my eyes. I figured that it would be some crummy storyline that was only written so that it could be made into some straight to DVD movie or some Saturday morning Disney show a la Hannah Montanna, HOWEVER, imagine my surprise when I read the book and find that it is really good- and better than even good! Like, "I think you would be crazy to not like this book".

Sometimes YA books revolving around 16 year olds irk me a bit, I just find them to be kinda mindless or too superficial, however, I did not experience that at all while reading this book. I found myself bursting out laughing quite a few times in this book, and not because I was laughing at dumb writing or anything, I was laughing because Sophie is a great strong female character with a killer sense of humor (I know, I probably looked really weird reading a Disney novel in the university library, and randomly bursting out in laughter, while everything was dead silent because everyone was studying for exams- oh well)... And I really did like the best friend, Jenna, in this instance. Sometimes I find that the best friend can be a little annoying or completely unnecessary in a storyline (see Shelby in Lauren Kate's "Torment"), but I didn't find that at all. Also... The love interest Archer? Great guy and totally swoon worthy. And again (thank the high heavens), Sophie and him did not develop feelings for one another as soon as they set their eyes upon one another.

And the bad guys (yes, there was more than one, and Rachel did a beautiful job weaving them all in together and tying up all of the loose ends at the end of the novel)... Bad "Guy" #1, Elodie, was pretty likable, which again, is kinda surprising for me to admit. There was a few times in this novel where I did feel really bad for her, especially after losing her friends and finding that her boyfriend had feelings for another... And I didn't feel like pulling my hair out when reading about her and all of her crazy antics. And of course, that darn Alice (Bad "Guy" # 2)! I didn't trust her from the get-go... I mean, isn't it kinda weird that the ghost of your dead grandmother, who mysteriously developed magical powers out of the blue (which is completely unheard of), and who is almost the same age as you are (which is just plain weird), just randomly shows up, tells you that you are one of the most powerful magical beings ever- if not the most, and wants to teach you how to hone your ability? I mean, on the one hand, you might think that that is really nice and all, but on the other hand, there is just so much mystery surrounding her that you can't help but be a little suspicious of her motives. And Bad Guy # 3? Well, I will keep that one a mystery... But I will say that I don't think that this character is bad whatsoever, though the evidence (the tattoo) may suggest otherwise. It might be naive of me to think this, but I think that this character is innocent and was coerced for whatever reason into doing what they did, I don't think that had a choice in the matter whatsoever (but as mentioned, that might just be wishful thinking on my part).

AND THE ENDING/ LAST SENTENCE OF THE BOOK?!? UGH!!! It is really shocking in my opinion and it completely changes the outcome of the story (but in a good way, I think. Well... I hope so at least).

So yes, I think that you are really missing out if you have yet to read this book (or if you have this book at the bottom of your TBR pile- you know who you are! Move this book up to the top ;) )... And I am super looking forward to the second book in this series, "Demonglass", which comes out in a matter of months!