"Waiting On" Wednesday is a weekly event, hosted over at Breaking the Spine, that spotlights upcoming releases that we're eagerly anticipating.
What I can't wait to get my hands on? 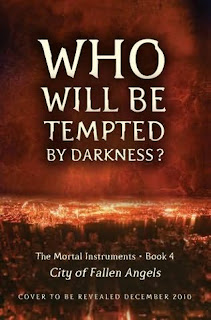 Okay, so if you read my blog you probably have noticed how much I love Cassandra Clare's "Mortal Instruments" series/ how obsessed with the series I am. When I heard that three more books were going to be added to the series I bawled because I was so happy. April 5th cannot come soon enough! Since there isn't an actual description of the book released yet on Amazon or whatnot, I "borrowed" the answer from a FAQ on Cassandra's website: What is City of Fallen Angels about?

Answer: "City of Fallen Angels takes place about six weeks after the events of City of Glass. It continues the story begun in City of Bones, while also starting a new story, with new challenges and a new enemy to beset our protagonists. All the core characters from the Mortal Instruments series appear in it: Jace, Isabelle, Clary, Simon, Alec, Magnus, Luke, Jocelyn, Maia, and many more. (It even helps to have read The Clockwork Angel before you read CoFA, because some of the characters from the ID series do show up in it. However, it isn’t required.) City of Fallen Angels takes place several months after the events of City of Glass. In it, a mysterious someone’s killing the Shadowhunters who used to be in Valentine’s Circle and displaying their bodies around New York City in a manner designed to provoke hostility between Downworlders and Shadowhunters, leaving tensions running high in the city and disrupting Clary’s plan to lead as normal a life as she can — training to be a Shadowhunter, and pursuing her relationship with Jace. As Jace and Clary delve into the issue of the murdered Shadowhunters, they discover a mystery that has deeply personal consequences for them — consequences that may strengthen their relationship, or rip it apart forever. Meanwhile, internecine warfare among vampires is tearing the Downworld community apart, and only Simon — the Daylighter who everyone wants on their side — can decide the outcome; too bad he wants nothing to do with Downworld politics. Love, blood, betrayal and revenge: the stakes are higher than ever in City of Fallen Angels (release date: 4/5/2011)."
Doesn't it just sound so gosh darn amazing?!? And... AND!!! If you go to your local bookstore and pick up a copy of the latest soft cover edition of "City of Bones" it has the first chapter in it! WHICH YOU MUST READ IN ORDER TO EXPERIENCE SHEER FANTABULOUSNESS!!!
;)

PS. Don't forget to check out my FIRST FANTABULOUS GIVEAWAY! I only need 3 more followers to "up" the prize!
Posted by Avery at 2:28 PM