Queene of Light by Jennifer Armintrout 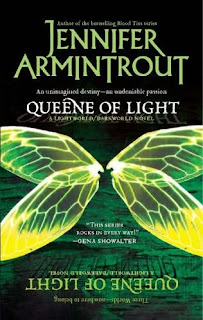 From Amazon: "In a time not long from now, the veil between fantasy and reality is ripped asunder—creatures of myth and fairy tale spill into the mortal world. Enchanted yet horrified, humans force the magical beings Underground, to colonize the sewers and abandoned subway tunnels beneath their glittering cities.

But even magic folk cannot dwell in harmony, and soon two Worlds emerge: the Lightworld, home to faeries, dragons and dwarves; and the Darkworld, where vampires, werewolves, angels and demons lurk.

Now, in the dank and shadowy place between Lightworld and Darkworld, a transformation is about to begin….

Ayla, a half faery, half human assassin, is stalked by Malachi, a Death Angel tasked with harvesting mortal souls. They clash. Immortality evaporates, forging a bond neither may survive. And in the face of unbridled ambitions and untested loyalties, an ominous prophecy is revealed that will shake the Worlds."


(Quick Note: So I blogged a month or so about how I had reorganized all of my bookshelves and in doing so I found a ton of books that I had purchased but never gotten around to reading, this was one of them. I don't know why I didn't read it sooner, it is a pretty quick read, something right up my alley (fantasy), and whatnot. Slightly kicking myself for waiting so long to read it...)

Sometimes I find when readings books dealing with Fae/Faery/ Fey/ you know what I am talking about regardless of the spelling, hauntingly beautiful creatures, sometimes with or without wings, that like to play little tricks and mind games on human, are allergic to iron and whatnot,  I find that you have to have some previous knowledge of how the Faery world works, for instance the Dark and Light Courts, the Seelie and the Unseelie Courts, the Winter and the Summer Courts, The Great Hunt and things along those lines. When I was reading the first thirty or so pages of this book I felt like I did not understand anything that was going on... I don't know if if is because I am used to reading about the Summer and Winter Courts in books by authors like Melissa Marr and the Seelie/ Unseelie Courts Holly Black, that I found it difficult to completely understand/ comprehend how this world of Faeries is organized and structured. However, I was fortunately soon able to pick up the general idea of how it is structured/ its happenings and whatnot (but you know, after 30 pages into it ;) ).

It is a nice take on the world of the faeries... It kind of reminds me of the "Artemis Fowl" series, the human live above ground and the faeries live below ground, and at the same time reminding me of "Avatar", with the big beautiful tree of life thinger. The world isn't so hauntingly beautiful that humans cannot grasp/ comprehend such beauty like many faery stories, everything in this world is almost downtrodden or muted.

I really like this book, it is probably the best book I have read within the last month or so... The character development is great, there is the good guy turned into evil villain that you cannot help but love yet loathe at the same time, the strong little female character who will protect anyone and everyone no matter how much it hurts her to do so (which makes you approve of her even more), and the mysterious male character whose intentions you question in the beginning but soon fall head over heels for...

What I also appreciate about this book is that though it does have a cliffhanger ending, it isn't the kind of cliffhanger that makes me want to shake the author and yell "WHY CAN'T YOU WRITE A COMPLETE STORY?!?", or you know, just makes me want to pull my hair out. This book could stand alone by itself, without any additional books- but that wouldn't be as much fun. But I will definitely be checking out the last 2 books of this trilogy (and you should too!).

PS. Don't forget to check out MY FANTABULOUS FIRST GIVEAWAY! I only need 3 more followers to "up" the prize!
Posted by Avery at 9:41 AM