13 to Life by Shannon Delany 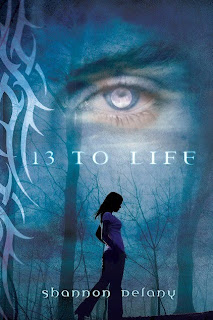 From Amazon: "Everything about Jessie Gillmansen’s life changed when her mother died. Now even her hometown of Junction is changing. Mysterious dark things are happening. All Jessie wants is to avoid more change. But showing a hot new guy around Junction High, she’s about to discover a whole new type of change. Pietr Rusakova is more than good looks and a fascinating accent—he’s a guy with a dangerous secret. And his very existence is sure to bring big trouble to Jessie’s small town. It seems change is the one thing Jessie can’t avoid…"

What I liked about this book is that it did not start out like this: "The young female character looked across the school cafeteria at the dark, haired mysterious and utterly gorgeous new boy in school. When he looked up from his lunch and looked at her, sitting across the room, their eyes met. There was an instant connection, sparks flew, and she knew that nothing would ever come between them and that she would protect him no matter what and he would feel and do the same", like I have found so many young adult books to start out like lately (see my more in-depth rant into idea at my review of "Halo" by Alexandra Adornetto)... So all I can say is THANK GOODNESS! Nope, Jessie was very resistant and it took her a while to trust Pietr and come to like him. She wasn't one of those drippy girls who fell for his charms right away.

Jessie is such a strong female character- seriously, the whole Sarah situation?!? Yeah, I think I know that had I been in that situation I would not have been forgiving whatsoever... And it's not like Jessie just forgave Sarah, no, she went way above and beyond, helping Sarah like no other had helped her (well, besides the doctors and whatnot I am sure who had to physically stitch her up)... Not going to lie though, I was getting a little peeved off with Jessie when she kept referring to Sarah as her best friend in front of Amy (who should have been her bestest best friend), I mean, come'on! That is the most annoying thing ever, when the best you consider to be your best friend doesn't consider you to be their best friend... And the CIA jazz?!? Not expecting that whatsoever, so I am really looking forward to how that is going to play out in the next book.

My only real complaint is that I think that had the ending, where pretty much all of the action taken place, should have started earlier in the novel (and should have constituted more than the last twenty or so pages of the book)... I think that had that happened I would have liked the book even more so. I am just left with so many darn questions with the ending (and we all know how much I hate that!)... I think I may have to reread the ending... For instance, so because Alexi is not Pietr, Cat's and Max's brother, he is not a werewolf? How in the world could he hide that little fact? Or is the werewolf gene only thought to "pop up" in some children and not others thereby explaining that little discrepancy? Werewolves lifespans are compressed/ shortened? So why does when Alexi ask Pietr how old Jessie is say "Almost seventeen, like you?" I read it like Alexi was implying that Pietr is not like Jessie in age whatsoever, like he was not seventeen, or like he had been seventeen for a long time (FLASHBACK TO "TWILIGHT": "How old are you?" "Seventeen." "How long have you been seventeen?" "For a while."- Totally had that memorized... HA!). And what is with age thirteen? Does age thirteen mark their change?

Rating: 8.5/10 (I would just like to note that I would have probably rated this book 10/10 had the author, Shannon Delany, agreed to write me into her next book as either Pietr's love interest or as a chick ass CIA chick, as per our Twitter conversation... Just kidding, kinda ;) )...

PS. Don't forget to check out MY FANTABULOUS FIRST GIVEAWAY!
Posted by Avery at 11:08 AM