On My Wishlist is a great event that Book Chick City runs every Saturday. It's where you list all of the books that you desperately want but haven't actually bought yet. They can be old, new or forthcoming. I thought that this was a fantabulous idea so I thought I would join in! "Child of Darkness" is the second book in the "Lightwood/ Darkwood" series by Jennifer Armintrout. I just finished reading the first book in the series (I reviewed it here), so I am really excited what happens with all of the great characters in this next installment.
From Amazon: "At a Lightworld royal gala, Queene Ayla announces the betrothal of her daughter, Cerridwen, to a high-ranking councilor. Though strategically brilliant, the engagement comes as a shock—to Cerridwen especially. Infuriated by her mother's high-handedness, ignorant of her own true origins, she flees the court—leaving herself vulnerable to those who would see the Lightworld destroyed.
Amid burgeoning unrest, desperate desires become divided loyalties and terrifying mercenaries lurk in the shadowy space between rebellion and anarchy". 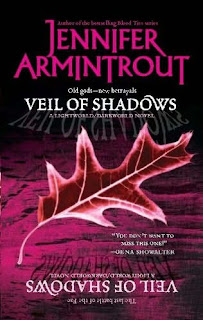 This, "Veil of Shadows", is the third and last book in the "Lightwood/ Darkwood" series by Jennifer Armintrout. Again, super excited to see how the books are all wrapped up.
From Amazon: "With the immortal denizens of the subterranean Lightworld and Darkworld societies locked in battle, the heiress to the Faery throne is exiled to the Human realm above. Accompanied to the Upworld by her mother's trusted advisor, Cerridwen is bound for Éire—and the last Fae stronghold on Earth. But even this fabled colony is no true haven.
In the absence of the true Fae monarch, the formidable Queene Danae established herself as ruler—and she does not wish to relinquish her power, especially over the devout Humans who live among the Fae as servants.

Torn between her own beliefs and the ideals her mother died for, Cerridwen searches for clues to her destiny—is it on Earth among the Humans, or beyond an ethereal portal, in the immortals' ancestral home? Neither path can avert bloodshed—and the choice may not be hers to make."

Well that's it for my weekly wishlist... What is on yours?!?

PS. Don't forget to check out MY FANTABULOUS FIRST GIVEAWAY!
Posted by Avery at 9:40 AM