"Waiting On Wednesday" is a weekly event, hosted over at Breaking the Spine, that spotlights upcoming releases that we're eagerly anticipating. So I know that I have already featured this book... But the cover was just released yesterday and a new little snippet of it, so I just had to feature it again (plus you know, this is my favourite series ever)... 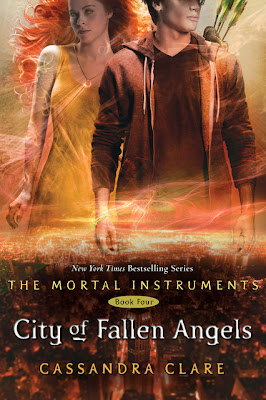 Title: "City of Fallen Angels"
Author: Cassandra Clare
Release Date: April 5, 2011
From EW: "Simon glanced toward the window. It was a brisk night, and the wind was blowing leaves across Second Avenue like handfuls of thrown confetti. There was a girl walking down the street, a girl in a tight belted trench coat, with long black hair that flew in the wind. People turned to watch her as she walked past. Simon had looked at girls like that before in the past, idly wondering where they were going, who they were meeting. Not guys like him, he knew that much.
Except this one was. The bell on the diner’s front door rang as the door opened, and Isabelle Lightwood came in. She smiled when she saw Simon, and came toward him, shrugging off her coat and drap- ing it over the back of the chair before she sat down. Under the coat she was wearing one of what Clary called her “typical Isabelle out- fits”: a tight short velvet dress, fishnet stockings, and boots. There was a knife stuck into the top of her left boot that Simon knew only he could see; still, everyone in the diner was watching as she sat down, flinging her hair back. Whatever she was wearing, Isabelle drew attention like a fireworks display.
Beautiful Isabelle Lightwood. When Simon had met her, he’d as- sumed she’d have no time for a guy like him. He’d turned out to be mostly right. Isabelle liked boys her parents disapproved of, and in her universe that meant Downworlders—faeries, werewolves, and vamps. That they’d been dating regularly for the past month or two amazed him, even if their relationship was limited mostly to infre- quent meetings like this one. And even if he couldn’t help but wonder, if he’d never been changed into a vampire, if his whole life hadn’t been altered in that moment, would they be dating at all?"
PS. don't forget to check out MY FANTABULOUS FIRST GIVEAWAY!
Posted by Avery at 6:03 PM