"My Soul to Steal" by Rachel Vincent

Today, my review of Rachel's latest book, "My Soul to Steal" (which hit shelves on January 1st, 2011), officially marks the end of my reviewing of the "Soul Screamer" series (well that is until "If I Die", the fifth book in the series, comes out this fall). You can check out all of my previous reviews: "My Soul to Take", "My Soul to Save", and  "My Soul to Keep". 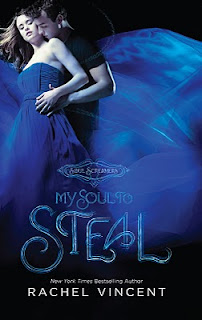 YOU WANT MY SOUL AND MY BOYFRIEND?

Trying to work things out with Nash—her maybe boyfriend—is hard enough for Kaylee Cavanaugh. She can’t just pretend nothing happened. But “complicated” doesn’t even begin to describe their relationship when his ex-girlfriend transfers to their school, determined to take Nash back.

See, Sabine isn’t just an ordinary girl. She’s a mara, the living personification of a nightmare. She can read people’s  fears—and craft them into nightmares while her victims sleep. Feeding from human fear is how she survives.

And Sabine isn’t above scaring Kaylee and the entire school to death to get  whatever—and whoever—she wants.

I DON'T THINK SO.

I found this book to be  frustrating, that is not to say that it was bad by any means, it was great and tied as the best book in the series, but just some of  the characters frustrated me.

First off? Nash. In my reviews of the previous book in this series I stated that I did enjoy seeing Nash knocked down a few notches, it made him seem more human(ish) and not the stereotypical popular pretty boy jock that he seemed to be in the first two books- but in this book? He was as sad as a puppy that got kicked. I understand that in the recovery process he was experiencing a hard time, was depressed and everything, but I just felt like he really played that up, trying to make Kaylee feel extremely bad for him and guilty for breaking up with him. Kaylee had every right to break up with him- simply put he betrayed her and I don't think he deserves her forgiveness. And the whole Sabine situation? Well buddy, you are trying to earn your ex-girlfriends trust again so that she will once again be your girlfriend- WHAT IN THE WORLD ARE YOU THINKING, HANGING OUT AT ALL HOURS OF THE NIGHT WITH YOUR EX-EX-GIRLFRIEND WHO EX-GIRLFRIEND WILL OBVIOUSLY BE JEALOUS OF?!? THAT IS NO WAY TO EARN EX-GIRLFRIENDS TRUST/ SHE WILL OBVIOUSLY NOT COME RUNNING BACK TO YOU... Pfew, now that that is off my chest...

As for Kaylee? I must say that I was extremely proud of Kaylee for the majority of this book. She stuck to her guns and didn't go running back to Nash as soon as he apologized to her. But I am frustrated with the fact that she was unable to give Nash up overall. I think that Tod made some extremely valid points about Sabine and Nash being better for one another than her and Nash being together.  I don't think that either Kaylee nor Nash can live up to their full potential if they stay in their relationship. And I might be the only one out there but... I really want to see Tod and Kaylee together! Or heck, I will even take Alec and Kaylee together (but more so Tod and Kaylee)! And Sabine? Though I found her to be frustrating with all of her sluttiness/ boyfriend-stealer-ish behavior, I didn't hate her. She was dealt such a crappy hand in life- it's kinda like she won the worst possible lottery,  being the seventh daughter of a seventh daughter, and as such becoming a literal nightmare- or mara. As I mentioned previously, I really would like to see her and Nash together, because as Tod explained both her and Nash are broken in a sense, and together they could become a whole- and I believe that she really does deserve happiness.

I thought that it was great seeing Emma grow even more so in this book/ really come to terms with the crazy world that she was thrust into. Also, I loved learning more about Alec. He is such an intriguing character and I really cannot wait to see what role he will play in "If I Die"- plus all of the banter between him and Kaylee with her always calling him "hot" despite his physical age versus mental age, in front of her dad? Hilarious.As for Avari? Stay in the Netherworld you friggin' hellion and stop trying to destroy everyone's life!

All in all? Rachel is clearly bettering herself as an author with each of the books in this series, therefore I cannot wait to see what "If I Die" has in store for us. And something that I have been thinking about since learning the title of "If I Die"... You know that little prayer (my grandma used to say it to my little sister and I every night when we were youngin's, "Now I lay me down to sleep I pray the Lord my soul to keep, if I shall die before I wake, I pray the Lord my soul to take". Well I wonder since some of the titles in this series are "My Soul to Keep", "My Soul to Take", and "If I Die", if the sixth book (that is, if there is going to be a sixth book in the series- I'm not sure if there is), if it will be called "Before I Wake"- it makes sense doesn't it?

(I received this ARC from Rachel Vincent in a giveaway on the condition that I would read and review it and was I not compensated for my review).