So I am pretty sure that everyone knows by now how much I love Cassie Clare's "Mortal Instruments" series (a lot- I practically worship the series) and for the last couple of years I have wanted to make some poppets of a few of the characters (Jace and Clary), but I just never got around it. Well this weekend when I found what I thought was a great ball of yarn for hair, I knew that I had to put aside everything and get going (sorry homework! ;) ).

Poppets are button jointed dolls created by ghillie over on Craftster (you can get the pattern for free HERE). I started making poppets about two years ago and they are my most favourite thing to make (even if I don't get to make them all that often with school and reading- HERE is a gallery that contains all of the poppets that I have made in the past).

This poppet was a lot of firsts for me. This was the first male poppet I have ever made (and those abs? Yeah, kinda hard to make), this was the first time that I had ever used eyelashes (which was surprisingly not hard and I plan to give eyelashes to all of my other poppets I have made that don't have any), this was the first time I tried to make a humanoid poppet (usually poppets have cat ears, a tail, and paws), this was the first time I gave a poppet 5 fingers and 5 toes with the fingers having pipe-cleaners in them so that they can be positioned, and this was the first time I tried painting a poppet (I really love how the runes turned out, I am going to have to go over a few of the areas a couple o'more time, but I think for painting them with a BBQ skewer they came out pretty well- and I added some of the new runes like "love")... I initially made Jace's hair long with the intention of cutting it short afterwards, but over the last day it has really grown on me and I love the length- so I think I will keep it as is (and I love how messy his hair can look).  Since I have always made girl poppets before, I have only ever made dresses (which I find kinda easy to do, even with my lack of clothes-making abilities)... So until I can learn how to make boys clothes, he is going to be naked... Hence the "censored" sign...  ;) 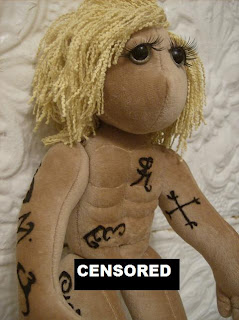 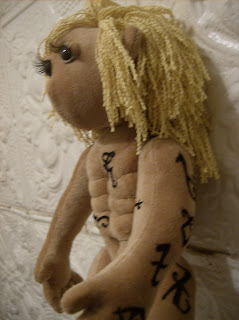 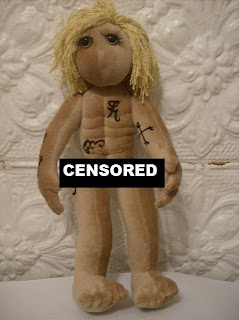 I hope to start Clary soon (when I picked up Jace's hair I also got a great reddish/ orangish hair for her). I don't think that she will be all the difficult to make since, like I said, girl poppets are my forte).

So yep, a pretty productive weekend (despite the fact that I didn't do any homework), I would say!
;)
Posted by Avery at 9:44 AM