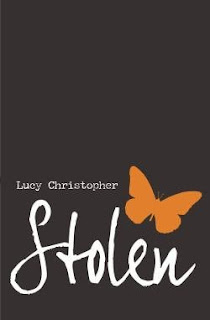 From Goodreads: "Sixteen year old Gemma is kidnapped from Bangkok airport and taken to the Australian Outback. This wild and desolate landscape becomes almost a character in the book, so vividly is it described. Ty, her captor, is no stereotype. He is young, fit and completely gorgeous. This new life in the wilderness has been years in the planning. He loves only her, wants only her. Under the hot glare of the Australian sun, cut off from the world outside, can the force of his love make Gemma love him back? The story takes the form of a letter, written by Gemma to Ty, reflecting on those strange and disturbing months in the outback. Months when the lines between love and obsession, and love and dependency, blur until they don't exist - almost."

When I first started reading this book I realized that it was written in a form that was unfamiliar to me- the entire story had already taken place and the narrator, Gemma, was recounting the story in the form of a letter. Sure, I have read books that contain letters, but not in all their entirety, so it did take me a while to adjust to the rhythm of the writing, but once I did I really came to enjoy how the story was written- it was really unique (notice the copy that I read was not called "Stolen: A Letter to My Captor", had it been called that I don't think I would have run into any problems knowing from the start that it was written in this manner). And all I can say is that thankfully I am not one of those people who cannot put a book down until they finish whatever chapter they are currently on- since there was no chapters in the book!

I'm not entirely sure how I feel about this book. I think that the story was really unique and the characters were quite interesting, but the slow pace really dragged me down and I found that the action that did take place was very predictable- about one third of the way through the book I was I was pretty sure that I knew how the book was going to end.

Ty was unlike any character I have ever read before. Typically I hate the "bad guy" with every fibre of my being, but I just couldn't make myself hate him, but then again, I couldn't entirely make myself like him- if anything, I felt extreme sympathy for him. He just had such a horrible upbringing... I do think it was somewhat sweet that a ten year old Gemma could completely change his life for the better, but his methods of stalking her afterwards? Not so sweet. I think that had he introduced himself to her at a later time (not when she was 16 and he was 25 like he did in the book) but maybe when she was in her twenties, like a normal person, they could have perhaps had something... But instead, he chose to kidnap her. He did try to justify his actions by saying that her parents were holding her back and whatnot, but it's obvious that he was also doing it selfish reasons. But after kidnapping her, I thought that he was a fairly sweet guy (granted there were a couple of times where he intentionally tried to scare her in the beginning) but he was always there to look after and care for her and he didn't force her into anything. And at the end of the novel? Well he knew exactly how that would end (and not in his favour), yet he still went through with it, when he could have easily run back into the Outback and for that her really redeemed himself in my eyes.

As for Gemma? It seemed like in her previous life she was somewhat superficial, always worried about what boy liked what girl, partying and getting drunk with her friends and whatnot, and typically that really bugs me in a character, but I think  that superficiality completely disappeared, exposing her strength and courage, making me like her quite a bit. I think that had I been in her situation I would have curled up in a ball and just withered away.

All in all, it is not the worst book I have ever read, nor is it the best book. I did find it to be somewhat slow, but the unique characters, specifically Ty, really help move the story along.