"My Soul to Keep" by Rachel Vincent 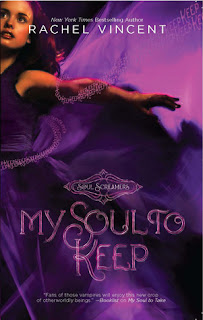 From Goodreads: "Kaylee has one addiction: her very hot, very popular boyfriend, Nash. A banshee like Kaylee, Nash understands her like no one else. Nothing can come between them.

Demon breath. No, not the toothpaste-challenged kind. The Netherworld kind. The kind that really can kill you. Somehow the super-addictive substance has made its way to the human world. But how? Kaylee and Nash have to cut off the source and protect their friends—one of whom is already hooked.

And so is someone else…"

When the first two books of this series originally came out I read them right away, though for some weird reason, I never got around to reading this book until a few days ago, but I had read many reviews of it and basically knew the majority of the plot line. I think that had I not known what was going to occur in this book before reading it, I wouldn't have picked up on all of the un-Nash-like behaviour to the extent that I did and had I not known what was going to occur beforehand, I don't think I would have put together all of the subtle clues/ guessed how this book was going to turn out. I think that knowing what was going to happen allowed me to accept, "Yes, this is going to happen and it is something that I just have to get used to", whereas had I now known, it would have come as such a surprise to me and I think that I would have had a very difficult time accepting how it unfolded...That being said, this is hands down the best book in this series...

As I have said, I am not a Nash fan and it may sound kind of heartless, but I did like seeing him being knocked down a few notches in this book. I felt like seeing a more vulnerable side of him made him seem more human (Er human? Right, he isn't human. Ummm... More nice bean sidhe who I can relate to and actually tolerate?). And surprise, surprise!  I actually found myself experiencing other emotions besides hate and loathing towards him, I found myself sympathizing and feeling bad for him in certain instances, for instance in the case that he wasn't the route cause of the addiction. In "My Soul to Save" he was totally against helping Addy and Tod and only went along with the crazy plan because of Kaylee, and for that, the initial addiction was not his fault. What was his fault was how he dealt with the knowledge that he was addicted afterwards and I don't feel any sympathy for him in that regard whatsoever (those darn hating and loathing feelings emerge once again). He was the one who went to the Netherworld in order to get a fix, he was the one who gave up his memories of Kaylee, knowing that it would break her heart, and he was the one who allowed those he cared about to be possessed, all the while knowing that his mom is the master of Netherworld cures who could helped him overcome his addiction right from the start.

Though Tod was more so at fault for the death of Doug and the downfall of Scott, than any other character besides Avari, I didn't find myself feeling any animosity towards him. In Nash's actions he was only thinking about himself, in Tod's actions he was thinking about Addy, and how he could lessen her pain and suffering in the Netherworld and that was something that I can respect and accept. I thought that it was also really nice to see Emma grow as a character in this book- I now find her to be much more than the blond friend who she was in the beginning of the series, the friend who was pretty oblivious to everything that was happening around her, only being concerned with what clothes she could steal from her older sisters. Also, I found myself feeling extreme sympathy/ pity for Sophie (even though she would probably hate my pity and bitch me out for it). That poor girl has just had a hard time, she really needs a break. First she loses a member of her dance team, then she dies, but comes back because her mom dies, she knows that her dad, uncle and cousin are keeping something from her, her boyfriend becomes an addict, is a huge jerk, and eventually ends up in a mental ward. So yeah, she deserves a shopping spree or something along those lines in the next book to make her feel better...

As for Kaylee? Well props to her for not just accepting the fact that her boyfriend is a complete user- both in using drugs and in using her and their memories together to further his own ends, and props to her for not forgiving him right away like some girls may have (just for the fact that he is Nash Hudson and he is such a catch! UGH!). I think that this experience even though it was quite horrific, will only strengthen Kaylee, making her an even more kick-ass female character.