I am excited to share with you the cover of Lori Strongin's latest release "Bite Me"! I will reading and reviewing this shortly- so stay tuned! 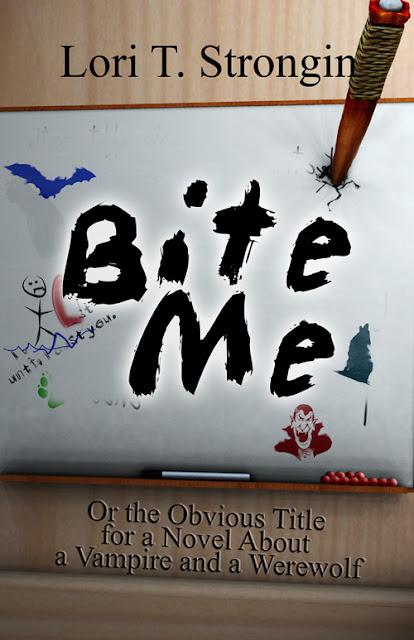 “Talbot blamed his mother for the fact he’d spent most of the summer impersonating a nun.”

So begins Bite Me, a humorous urban fantasy YA novel set at Hedgehill University for Paranormal Creatures.

In this Animal House meets Christopher Moore-esque story, freshman Talbot Osbourne is under pressure to find a summer job, an affordable apartment, and to not flunk out; otherwise he’ll face the wrath of his werewolf clan back home.  Buddhist, vegetarian vampire Julian St. George has problems, too, but his are more of the being-stalked-by-a-psychotic-slayer type.  After he ousts the intruder from his home, Julian figures that’s the last of that.

Talbot and Julian are forced to partner on a class assignment to study humans in their natural habitat.  That is, a strip club.  But while these two co-eds try to live their para-normal lives and pass their classes, the slayer targets both the university and the club, taking out students with any kind of supernatural abilities.  After Julian’s home is destroyed and he’s nearly killed, the vampire and werewolf form an unlikely—and probably unholy—duo to catch the stalker before the psycho slays them.  If they don’t kill each other first, that is.

Between surviving an apartment with cannibalistic furniture, zombie squirrels, and a strip club where the drinks are scarier than the suspects, Talbot and Julian struggle to catch up to the slayer, who always seems one stake ahead of them.

Throw in a shapeshifter with ferret envy, a nymphomaniac wizard who makes people’s clothes disappear, and the ghost of a five-year-old with the potty mouth of a sailor, and these boys are in for the summer of their lives.  Or deaths."

You can find out more about Lori and "Bite Me" HERE.
Posted by Avery at 12:00 AM