Hey y'all! My name is Avery I review primarily YA paranormal books at my blog Avery's Book Nook. I have been a long time stalker follower of YA Sisterhood and their tournaments so it should come as no surprise that I am super excited to be advocating Tessa from Cassie Clare's Infernal Devices series! You can follow me during the tournament at:


"Nate, with his fair good looks, was the one in the family generally agreed to have inherited her moth's beauty, but Tessa had always been perfectly content with her own smooth brown hair, and steady gray eyes. Jane Eyre had had brown hair, and plenty of other heroines besides. And it wasn't so bad being tall, either..." (Clockwork Angel, pg. 17).

She is inquisitive and open-minded. She loves to read just as much, if not not, than all of us and she can often be found quoting all of her favourite books:

She is by far one of Cassie's most unique and mysterious characters (In Clockwork Angel we are told that she appears to be a warlock, however her true identity- or a better approximation of her identity- is revealed in Clockwork Prince).

She takes everything in stride. Her clockwork angel pendant is one of the most kick-butt pieces of jewelry in the world of YA books (see Clockwork Prince).


"Nate was not like other people... He had a beautiful innocence about him that had to be protected at all costs. And Tessa had tried. She and her aunt had hidden Nate's own weaknesses from him, the consequences of his own flaws and failings. Never telling him of the work Aunt Harriet had had to do to make up the money he had lost gambling, of the taunts Tessa had endured from other children, calling her brother a drunk, a wastrel. They had hidden these things from him from being hurt" (pg. 352).

Tessa doesn't look down upon anyone (ie. Sophie occupying a lower social status than herself, Jem being ill)- she gives everyone the benefit of the doubt without doing so in a naive way.

Tessa is not dependent upon the males in her life (nor is she careless). She doesn't play on the boy's feelings for her- manipulating them to do what she wants.

Why should YOU Vote for Tessa instead of Clary? 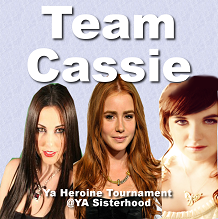 When you boil it down, Tessa and Clary have a lot in common (aside from the fact that the are both characters created by Cassandra Clare). Both were quite literally thrust into their supernatural lives (for both girls much of their earlier lives had been a lie). Both girls excel at some things (Clary is creative beyond belief and is able to use her talents to do what no other Shadowhunter has been able to- create runes, whereas Tessa doesn't jump into anything without giving it a lot of thought and is extremely eager to learn of the world around her), but are flawed at others (Tessa is at times too rigid, by following the rule book to a T, whereas sometimes Clary does things with very little thought). Both girls become stronger- mentally, physically, and emotionally- as the stories in which they are a part of unfold.  When it all comes down to it I believe both girls are the epitome of YA Heroines.

I think that you should vote for the girl who you truly think is worthy of the title- don't let the incentives sway in your decision. If you think that Clary is the stronger heroine, don't vote for Tessa just because you want Cassie to rewrite the Dirty Sexy Bedroom Scene from Jem's POV and vice versa- if you think that Tessa is the stronger female, but you really want to know what Jace was thinking in the greenhouse scene in CoB, don't vote for Clary just for the scene. It's simple- vote for the girl you think is most deserving.

There are a whole heck of a lot of people I have to thank- Rachel over at Fiktshun for giving me lots of pointers about how the tournament worked, Valerie from Stuck in Books and Amanda from Letters Inside Out for being members of Team Cassie alongside me, @CaitLomas and @chel_c_cam for being amazeballs Tweeters, Cassie Clare herself for being so active in the tournament, and most importantly, the ladies of YA Sisterhood.

*Because this final features 2 members of Team Cassie everyone who votes is qualified to enter the Team Cassie Giveaway that Valerie, Amanda, Cassie, and myself created at the beginning of the tournament. To find out all of the giveaway details click HERE.
Posted by Avery at 12:00 AM