The birth of an Indie writer - Laxmi Hariharan

A chance meeting with a stranger in Hong Kong sparked off The Destiny of Shaitan. At that point, Harry Potter had released, and the blackberry had just squeaked to life. By the time I completed it, fantasy was a mainstream genre, and the tube was alive with the silent swoosh of kindles.

On the advice of a writing program, I decided to move on to my next novel without completing Shaitan. Six months into plotting chapter and scenes for my second, my first born clamored for more.

If I wanted readers to dedicate time to my novel then I had to be a one hundred percent sure of my content. I commissioned an editor - and rewrote the entire second half of the book; a full 150 pages in three weeks. At the end of which, I felt like Michael Fassbender’s character in A Dangerous Method. I had a swollen right hand; minus the orgasms of course.

Then, came the search for my cover. I first found a young Romanian student based in Bucharest who was very eager to try his hand at it. After a few changes I had what I thought were interesting clothes for my baby. I happened to show it to my husband who dismissed it in one sentence: “The woman looks like an ugly Bollywood heroine.” Crushed, off I went, hunting for a superior artist, and found a New York based book cover designer, ready to take it on. This time everyone loved the results, even my husband.

It had taken me nine years to birth it, but within three weeks, I had edited it, crafted the cover and released my first born to the swells of Amazon.

The Destiny of Shaitan was uploaded in time for the first round of KDP promotion.

Closure? It was just the beginning. Within minutes of declaring it a life-event on my Facebook timeline a friend told me she had downloaded it for her son. I panicked wondering if her fourteen year old should be reading the love scenes in the novel. A guest blog post on how western science fiction draws from Indian mythology drew emails from kindred souls. I was not alone.

Oh! I also wiped out my annual savings in a matter of weeks. Once I opened my purse strings to promote Shaitan, there was no looking back. Within days it was clear that while I was a London based writer, my real market was the US, with its wide kindle reach. I refocused, targeting all my efforts stateside. Most mornings I was awake at four a.m. trawling the internet, promoting my first born on various social networks; I discovered a family of writers like me; many ready to lend a helping hand and an encouraging word.

This was my new avatar. Welcome Indie writer.

Self-e-publishing seems to be an oxymoron. It’s great to be published, but terrifying to be actually read. Once the book is out there, you scramble to promote it and soon there is no mind-space to write, which is why you got into it in the first place. But, I love it. I thrive on the contradiction that comes with the freedom of being the captain of your own destiny; wouldn't have it any other way!

What are your experiences with e-publishing? I would love to hear from you.

Summary: Partially set in a dystopian Bombay of the future, The Destiny of Shaitan is a coming of age story, painted against the backdrop of a post-apocalyptic world.

Yudi, Tiina & Rai embark on a mission to save the universe. Sent to retrieve the Isthmus from the ruthless Shaitan, Tiina seeks more than the end of the tyrant; she seeks herself. Shaitan is determined to stop them at any cost. The three friends must learn to trust each other and overcome their fears as they fight towards the ultimate showdown. The universe is at stake and the combatants determined. Will Shaitan's ultimate destiny be fulfilled? 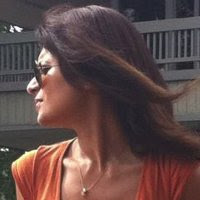 About Laxmi Hariharan: I am a writer, technophile & dare I say, a futurist, with a penchant for chai and growing eye-catching flowers. Wanderlust drove me out of my home country India and I travelled across Asia, living in Singapore and Hong Kong before coming home to London. I am inspired by Indian mythology; I draw strength from the stories my grandmother narrated to me as a child. It is in acknowledging my roots that I found my voice. When not writing I love walking in the woods with my soulmate, and indulging my inner geek.

"The Destiny of Shaitan is mind blowing, dark, humorous, and clever. It took me on a powerful journey inwards, which was a surprise as I'm not generally drawn to scifi or fantasy."


"The low-key humour that runs like an under-current through this delightful, gripping adventure had me chuckling from page one"


“A truly refreshing approach because it is inspired by Indian mythology, direct references to which are few in the sci-fi/fantasy genre. That aside, Shaitan is a ripping yarn and a gripping read and a must have for every fan of the genre. Besides, it's bound to win more fans from across genres too. The character of Rai in particular is the most fascinating, but that's not to take away from the other players in the narrative especially Yudi and Tiina and of course the titular evil Shaitan himself, who makes Darth Vader look like a kindergarten wimp.”