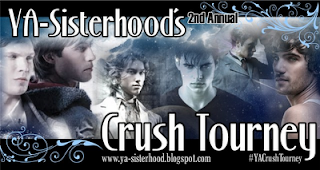 As many of you probably know by now I am competing in YA Sisterhood's YA Crush Tourney and I could use YOUR help! I am Cricket's advocate (from Stephanie Perkins "Lola and the Boy Next Door"- one of my ALL TIME favourite books) and for the next 24 hours Cricket is going head-to-head with Adrian from Richelle Mead's "Vampire Academy" and "Bloodlines" series (also two of my most favourite series of all time). I would appreciate it more than you could imagine if you could head over to YA Sisterhood's blog and vote for CRICKET! Let's let the nice guy finish first for once! 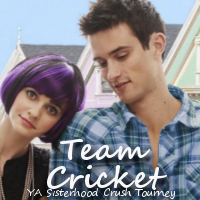 "Cricket dwarfs St. Clair. They look like Rocky and Bullwinkle, and the comfortable manner between them makes it appear they've been friends for just as long. I suppose that when one overly kind person and one overly outgoing person become friends, it's easy like that" (pg. 163).

"And maybe some people think that wearing a costume means you're trying to hide your real identity, but I think a costume is more truthful than regular clothing could ever be. It actually says something about the person wearing it. I know that Lola, because she expressed her desires and wishes and dreams for the entire city to see. For me to see" (pg. 281).

I don't want to mess with Stephanie's description of Cricket ('cuz, we all know that you don't mess with perfection ;) ) so here it is straight from LOLA AND THE BOY NEXT DOOR:

"Cricket Bell was always taller than most boys, but in the last two years, he's added half a foot. At least. His slender body- once skinny and awkward, despite his graceful movements- has also changed" (pg. 36).

"Cricket Bell has always been... nice. And he was cute, and he was intelligent, and he was older, and it was only natural that I would develop feelings for him. But the day everything fell into place was the same day I discovered that he'd become interested in his appearance. Not in an egotistical way. Simple in a "maybe baggy shorts and giant sneakers aren't the most attractive looks for a guy like me" way.
So he started wearing these pants.
Nice pants. Not hipster pants or preppy pants or anything like that, just pants that said he cared about pants. They were chosen to fit his frame. Some plain, some pinstriped to further elongate his height. And he would pair them with vintage shirts and unusual jackets in a way that looked effortlessly cool" (pg. 37).

"And now here he is, and his dress habits haven't changed. If anything, they've improved. Both his pants and his shirt are still slim-fitting, but now he's accessorized. A thick, black leather watchband on one wrist, a multitude of weathered colorful bracelets and rubber bands on the other. Cricket Bell looks good. He looks BETTER" (pg. 38).

"When I was five years old, Cricket Bell built an elevator. It was a marvelous invention made from white string and Tonka truck wheels and a child-size show box, and because of it, my Barbies traveled from the first floor of the dollhouse to the second without ever having to walk on their abnormally slanted feet" (pg. 59).

"Andy explains that baking is actually a science- leavening and acids, proteins and starches- and Cricket gets it" (pg. 115).

Special thanks goes out to the wonderful ladies of the YA Sisterhood for all of the hard work that they do in the organizing of this tournament- they are truly rockstars! Special thanks also goes out to @librarychickD for her being a member of the Team Cricket Street Team and thanks to all who vote for Cricket!
Posted by Avery at 7:59 AM