Today I am excited to have author Nathan Wrann stop by the blog to tell us a bit about his "Cor Griffin Bloodsuckers" series, what his thoughts on writing a vampire series are, and whether or not he reads reviews!

From Goodreads: "A new town. A new school. A new beginning. Seventeen year-old Cordell Griffin and his mother move from Los Angeles to the Pacific Northwest to deal with his "allergies," and start a healthier new life. Cor has one goal: To blend in and be invisible. Unfortunately for him, no matter how far he goes, he can't run away from his secrets. Secrets about who he is. Secrets about why he's sick. And secrets about why so many people he meets end up dead, drained of blood.

In "Dark Matter Heart", the origin novel in the "Cor Griffin Bloodsuckers" Young Adult Paranormal Thriller series from filmmaker Nathan Wrann, Cor must uncover the mysteries of his past and conquer the secrets of the present in order to protect the girl of his future, and save himself."

You have three books under your belt now, do you find that you have an easier time writing a book as you gain more experience?

I don’t think it ever gets easier to actually write a book. It still takes a lot of time, motivation and dedication to put the words down on a blank piece of paper or type them out on a blank screen. What does get easier is writing a better book than the previous one. But that doesn’t necessarily come simply from writing more, it comes from having people read the work and give feedback. I have a friend who’s a writer (Shandy Lawson, check out his book “LOOP” coming soon) that I trust and the feedback he gave me on “From Out of Chaos” (Book 2 in the Dark Matter Heart trilogy) improved my writing immensely. He pointed out all of the annoying things I do (like overuse the phrase “a half dozen” and I learned from that. If I had been writing in a vacuum I would never notice these things or be able to fix them. So writing a lot is good, and necessary. Getting good feedback is great.

What are some upcoming projects that you are working on?

I’m in the process of writing a new YA paranormal series that I haven’t titled yet. I think it’ll be quite different than what’s currently out there. From the paranormal aspect to the characters themselves.

How did you come to the decision to go indie?

I’m not big on “asking permission” to do things so sending out manuscripts and asking and wishing and hoping that an agent or publisher reads my work and decides it’s good enough was never really the right path for me. This is a mindset that I’ve had since my days as an independent filmmaker. If I’m going to gamble, I’m going to gamble on myself rather than an agent or publisher.

How has also being a filmmaker affected you writing?

It really fuels and streamlines the storytelling process. In a film there are limitations, like time. A movie can only be 90 minutes or 120 minutes and you have to tell a complete story in that time so you learn to cut out everything that doesn’t have an effect on the story. I think that’s why much of the feedback and many of the reviews that I’ve had for the Dark Matter Heart Trilogy mention it being fast paced or a quick read. Everything that’s in there is there for a reason. On the flip side a picture is worth a thousand words so in filmmaking or scriptwriting I can write “A beautiful sunset” and then the image that is captured displays everything clearly for the audience. In a book I have to find those 1,000 words or so to display the picture of that sunset for the reader.

Were you ever scared that readers would perceive your book as being ‘just another vampire book’? Do you think that there can ever be too many vampire books?

While writing it I was never scared of that. I get a little dismayed when I see that people won’t read it or review it because they’re “sick of vampire stories”. I understand that, and it’s okay because there’s still a huge audience for vampire stories, which is why so many are still written. I don’t think there can ever be too many GOOD vampire stories, but that goes for every type of tale. As long as it’s good, it’s welcome in my life.

Being an indie author what impact (if any) have book bloggers had on your career?

Do you read reviews? If so, how do you respond to negative (or not-so-nice) reviews?

I read all the reviews of my work that I can find. The reviews for Dark Matter Heart have been overwhelmingly positive but if a review is negative I’ll try to understand why the reader didn’t like the work. Sometimes there are just things inherent to the story (“oh another vampire book”, “it’s a male main character”) or the style (“I don’t like books written in 3rd person”) that the reviewer didn’t like and there isn’t much that I can do about that. But there have been comments made about some of the turns of the story or content, that I have tucked away for future reference. For example one review (a good review) said they wouldn’t recommend it to friends because of the swearing in book 1. So as I was writing book 2 I made a point to curb any swearing that wasn’t crucial to the story. It didn’t hurt the book and it may increase my readership so something like that is win-win. As far as publicly responding to reviews, I never do. People are entitled to share their opinions.

Any advice for aspiring authors?

My second bit of advice (and one I have to follow more closely myself) is to write every day for an hour. If you’re on a roll, write for 2 hours. Whether it’s good or bad, write for 1 hour. I always hear people say they want to write a book but don’t have time. Everybody has one hour every day. After awhile you’ll be able to plunk out 700-1000 words in that hour. After two months you’ll have 60,000 words done. That’s a book. And it was written in 1 hour every day. The important thing is (and this is where I run into trouble) is that you cannot, under any circumstances, take a day off.

Coffee? Yay. (I used to own a coffee shop)

Love triangles? Nay. They give me anxiety.

Cliff hangers? Nay. I like resolution, but I also like a good setup for the next adventure.

Endings that rip your heart out? Yay. 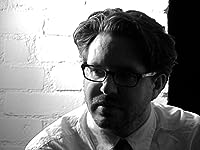 About the Author:
Nathan Wrann is a writer, publisher and independent filmmaker living in West Haven, Connecticut with his rescued chihuahua Napoleon, pain-in-the-butt cat Konstantine and wife Kimberly. His films, HUNTING SEASON, and BURNING INSIDE are currently available on DVD and VOD. His novel, "Dark Matter Heart" is now available for the kindle and trade paperback.
He has also co-written, with Heidi Fuqua, a Sci-Fi Horror Novel titled "EUROPA" under the pen name Nicholas Faraday.