Cover Reveal and GIVEAWAY: "There" by Denise Grover Swank

Today I am very excited to be a part of the cover reveal of Denise Grover Swank's "There"- "Here", the first book in her "On the Other Side" series, was a book which graced many of my "Top Ten" lists last year and a book that I HIGHLY recommend! 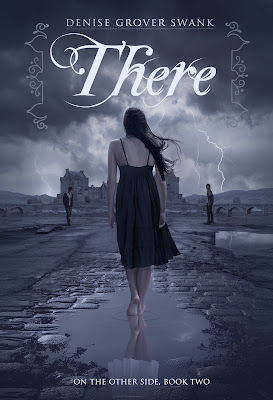 And the blurb (which is just about as exciting as the cover)!

Julia Phillips’ world is an alternate universe away.

Trapped in a land where government leaders want her dead, Julia is forced to run for her life with Evan and Reece, the two boys who brought her here. They’re on their own in a hostile landscape ruled by scavengers and thieves.

But Evan is battling a deadly infection, and Julia finds herself racing against time as she tries to find the medicine that will save his life. She and Reece find an unlikely ally—Jo, a girl they free after finding her captured in a bandits’ hideout.

As the four travel across the country, Julia has something else to worry about—her memories are slowly being replaced by the Julia of Evan and Reece’s world. Will they find a way to send Julia home
before it’s too late? Or will Julia’s body and mind be trapped THERE?

About the Author: Denise Grover Swank lives in Lee's Summit, Missouri. She writes urban fantasies without vampires and werewolves. She also writes romantic comedy mysteries set in the south. Denise has six children, three dogs, and an overactive imagination. She can be found dancing in her kitchen with her children, reading or writing her next book. You will rarely find her cleaning.