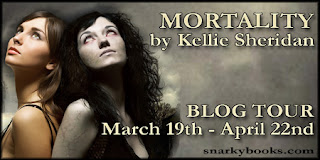 Today I am excited to have author Kellie Sheridan (and fellow Ontarian book blogger) to tell us a bit about her debut novel "Mortality"!


As a Canuck who reads a lot of books, I have a tendency to award Canadian books with bonus points. They’re Whose Line is it Anyways style points since they don’t really count for much, but if a story is written by a Canadian or set in Canada, I take notice. I’m sure a lot of people feel the same way about novels set in their hometown/state/country. A book set in a place you already know has the ability to suck you that much farther into the story. If something amazing can happen there, then something amazing can happen to you.

So why didn’t I set my own debut novel in the Great White North? Believe me, I wanted to. I’d always intended to. But I didn’t, and despite making my decisions for all the right reasons, I still feel a little bad about it. Canada can get pretty cold. We don’t actually live in igloos, but there is sometimes a desire to hibernate during the coldest months of the year. The zombies I created for The Hitchhiker Strain (at least some of them) freeze if left out in the cold for too long. With the initial outbreak of the virus happening in September, that gave maybe three months until most Canadians would see a significant uptick in their survival rate. Good for the characters maybe, but bad for the plot.

There were also some geographical issues. Most of our cities sit relatively close to the U.S. border, but we’re dealing with a large expanse of land. It was difficult for me to see how an infection that started in say—Calgary, would be able to spread and eventually overwhelm the world. I tried to science-it-out multiple times, but I just couldn’t get it to work in a way that worked with the story I wanted to tell. I was forced to rethink my plan.

Finally, there’s the issue of place recognition. Which city do you think is more well-known—Jackson, Mississippi or Mississauga, Ontario? Sacramento or Saskatoon? It’s really not much of a debate. While Canadian cities might be significant to me, that wouldn’t be the case for all of my readers. Part of what scares me about the idea of a zombie apocalypse, is you can imagine how it would unfold, how it just might be possible. If putting easily recognized landmarks into my character’s lives would help readers to immerse themselves that much farther into the world I’d created, then I had to go for it.

Or maybe I just didn’t want to have to imagine zombies running around in the streets of Toronto.

So, will my next series be set in Canada? Alas, probably not. My next few projects have a decidedly fantasy twist to them and won’t be set anywhere we can actually visit (except within the pages of a book, of course). But until I do manage to find a story that can allow a city or town in Canada to become that ‘could be anywhere’ setting for one of my novels, I won’t feel like I’ve checked off all the boxes on my writing career bucket list.

From Goodreads: "After surviving a deadly plague outbreak, sixteen-year-old Savannah thought she had lived through the very worst of human history. There was no way to know that the miracle vaccine would put everyone at risk for a fate worse than un-death.

Now, two very different kinds of infected walk the Earth, intent on nothing but feeding and destroying what little remains of civilization. When the inoculated are bitten, infection means watching on in silent horror as self-control disappears and the idea of feasting on loved ones becomes increasingly hard to ignore.

Starving and forced to live inside of the abandoned high school, all Savannah wants is the chance to fight back. When a strange boy arrives with a plan to set everything right, she gets her chance. Meeting Cole changes everything. Mere survival will never be enough."

About the Author: I have been in love with stories in all of their forms for as long as I can remember.

Admittedly, sometimes that means falling into places like Stars Hollow and Sunnydale, but books have always been my true love. In early 2011 I began writing a book blog in order to share my favorite reads with book lovers. From there, the bookish community encouraged me to stop sitting on my own stories and share them instead. Since then I’ve been madly devouring everything I can about digital publishing.

For the past two years I have been mainly obsessed with young adult books, but my favorite stories still come from the adult fantasy genre. As far as I’m concerned, Briggs, Bishop, Vincent and Vaughn are all must reads.

I spent part of my twenties living in Galway, Ireland and swooning after various lilting accents but am now back home in Ontario, Canada. My family includes two Glen of Imaal Terriers and a Green Cheek Conure.