Were you a fan of Chelsea Cameron's "Deeper We Fall" or a budding New Adult aficionado? Here is your chance to read and review an eARC of Chelsea's upcoming release "Faster We Burn" (companion novel to "Deeper We Fall")!

As Chelsea writes, "You don't HAVE to have read the first book, but it is helpful to know the characters and their dynamic."

If you would be interested in reading and reviewing the book contact Chelsea at chel.c.cam@gmail.com (and let her know which format you would like the book in)! 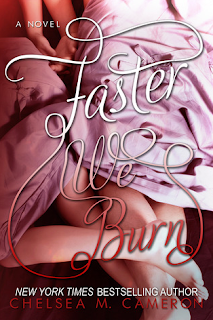 From Goodreads: "Katie Hallman is done with douchebags. Done with guys who treat her like crap and leave her broken. But then Stryker Grant is there anyway. With his numerous piercings and bleached hair, he’s the polar opposite of all of her past relationships, which makes him the perfect candidate.

At first, Katie just sees him as a physical escape from her previous rocky relationship, and Stryker doesn’t seem to mind just being a distraction from Katie’s problems. But soon he’s getting under her skin, peeling back layers she’d rather keep covered. She tries to make it clear that she doesn’t want a relationship, but keeps breaking her own rules.

Then a tragedy sends Katie into the only arms who are there to catch her, and she’ll realize that she needs him more than she ever thought possible. But is she ready to let herself trust another guy with her already-battered heart? Or will she push him away to protect herself from getting hurt again?"