In My Mailbox (aka lots of fun stuff)

In My Mailbox is a weekly post hosted by Kirsti at The Story Siren as a chance to share the books we've bought or received over the past week.

This week has probably been one of the best book weeks I have ever had. Seriously. Usually my "In My Mailbox" features books that I have borrowed from my local libraries, but not this week, these are all MINE! ;)

First off I got my Kindle! I had been so on the fence about E-readers for quite a long time, but when I traded in some textbooks and got a $50 Amazon card from them, well I just knew that I had to apply it a Kindle purchase. I haven't had all that much time to play around with it yet because of school and whatnot, but from what I have done on it? Well it is amazing! I love that I can surf the net, Tweet, read books on it and everything!

Because I bought the Kindle I also decided to buy a few books for it. These books were all really cheap ($1.99 and less, and they had some pretty awesome ratings, so I thought I would give them a go!):

I then also joined the March Random Acts of Kindness Event over at Book Soulmates and within 15 or so minutes of posting my wishlist I received amazing 3 E-Books (thanks so much Ivy)!

I then went to Chapters (where I hate buying books because they are always so expensive/ the store never has sales when compared to Amazon) and lo and behold! They had a ton of great books on sale! I got all four for less than $17- and all hardcover (well except for the Melissa Walker book):

And then I got "Demonglass" by Rachel Hawkins from Jess over at A GREAT Read. I finished it within a couple of hours of receiving it and I cannot wait to share my review of it with y'all within the next couple of weeks:

And okay, so obviously this did not happen in my mailbox, but I just had to share!
Do you remember Oreo who I introduced to y'all when we rescued him a few months back? Well when we rescued him we figured that he was maybe 3-4 months old (because he was so tiny) and therefore we though that he wouldn't be able to reproduce being so young. Well, turns out we were wrong and he was older than we thought! A few weeks back I was looking at Ruffles our female cat and I said to my parents, "Ah. She looks preggos". Everyone thought I was crazy. Turns out I was not! And what do you get when you mix Ruffles and Oreo?!? Pumpkin and Patch! 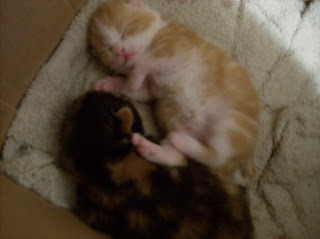 I love them. They are so tiny/ fuzzy/ squeaky.

Anyways, what did you get in your mailbox?