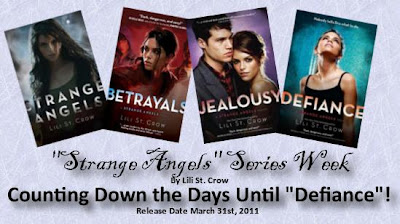 WARNING: Under no circumstances should you read the following if you have not read the first three books in the "Strange Angel" series. 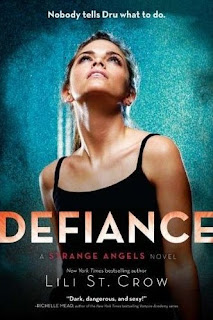 Now that sixteen-year-old Dru's worst fears have come true and Sergej has kidnapped her best friend Graves, she'll have to go on a suicidal rescue mission to bring him back in one piece. That is, if she can put all of Christophe's training to good use, defeat her mother's traitor, Anna, once and for all, and manage to survive another day . . ."

1) In yesterday's post "Questions That Will (Hopefully) Be Resolved in "Defiance" I proposed a number of different questions/ theories that I think might be either answered fully or discussed in more detail in "Defiance". I contacted Lili and I asked her if she would be able to comment on my different theories:

Ash went to the Schola with Chris, Elizabeth and the gang, and like all of the Dhamphir boys, he was also in love with Elizabeth


Ash never attended a Schola, he was Broken when he and Christophe were about fourteen--and, incidentally, friends.
OR he was Elizabeth's best friend, like Graves is Dru's best friend, who was in love with her (either way I think that he was in love with her and therefore Sergej used that that love against him to hurt Elizabeth even more). Therefore when Serej killed Elizabeth Ash vowed to protect Elizabeth's daughter (except for the one crazy time in a mall), therefore explaining why he is so protective of Dru.
No. The only time Ash ever got near Elizabeth was during the nosferat attack that claimed Dru's grandparents.
Dibs knows a Broken personally, perhaps this Broken is a family member and that explains why he always gets so pale and clams up whenever anyone mentions the Broken


Possible, but it's more likely that Dibs is sub and the smell of violent hurt on a Broken scares him.
Chris is a full-blown Glutter, which would explain why he smells like apple pie


There are two reasons Christophe smells the way he does to Dru. That's all I can say.
2) Would you ever consider writing an adult series using your "Strange Angels" characters (Note: I have always wondered if authors such as Lili or Kelley Armstrong would do this- wouldn't it be awesome to see Derek, Chloe and the gang written into Kelley's "Women of the Otherworld" series as adults?)?
I don't think I would. By the end of Reckoning (Note: the fifth and last book of this series which is coming out this fall), Dru's story arc is largely complete. If I did tell her story after that it would be an adult book, but I have no plans of doing so. I think I'd rather like to leave it as it is.
3) Chris or Graves? (I, as a fangirl, cannot make a decision about which boy I like more, so I thought it would be interesting to know who you, as the creator of both, liked more?)
I like--and dislike--both of them. Christophe is very committed, but he's also creepy-old and doesn't tell Dru everything she needs to know to make informed decisions. Graves is a good friend, but he has damage and is in no way ready for a relationship--though he gets mad props for not wanting to pressure Dru.

I seriously don't see why Dru has to "end up" with a boy at all. Dru is defined by a lot of things--her toughness, her vulnerability, her desire to do the right thing, her growing willingness to look past people's exteriors--but her relationship with a boy, any boy, isn't one of them.


Thanks so much Lili for taking the time to answer a few questions!
Posted by Avery at 3:44 PM