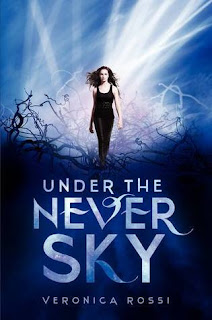 From Goodreads: "Exiled from her comfortable home, Aria knows her chances of surviving in the outer wasteland – called the Death Shop – are slim. Violent energy storms can strike suddenly, and even the very air she breathes might kill her. Then Aria meets an Outsider named Perry. He’s wild, dangerous – a savage. He’s also her only hope.

Because Aria alone holds the key to his redemption, Perry needs her, too. Their unlikely alliance will determine the fate of all who live under the never sky.

Debut author Veronica Rossi is accumulating fans from all over the globe—the book has already sold to more than twenty countries. It’s not surprising that foreign rights for this title have been flying off the shelf. It’s a tantalizing romance in any language."
Posted by Avery at 12:00 AM