On My Wishlist is a great event that Book Chick City runs every Saturday. It's where you list all of the books that you desperately want but haven't actually bought yet. They can be old, new or forthcoming. I thought that this was a fantabulous idea so I thought I would join in!
~~~~~~~~~~~~~~~~~~~~ 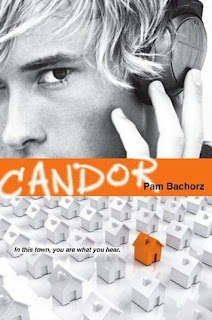 From Goodreads: "The picture-perfect new town of Candor, Florida, is attracting more and more new families, drawn by its postcard-like small-town feel, with white picket fences, spanking-new but old-fashioned-looking homes, and neighborliness.

But the parents are drawn by something else as well.  They know that in Candor their obstreperous teenagers will somehow become rewired - they'll learn to respect their elders, to do their chores, and enjoy their homework.  They'll give up the tattoos, metal music, and partying that have been driving their parents crazy.  They'll become every parent's dream."
~~~~~~~~~~~~~~~~~~~~

From Goodreads:  "Ade Patience can see the future and it's destroying his life. When the seventeen-year-old Mantlo High School student knocks himself unconscious, he can see days and decades into his own future. Ade's the best of Denver's "divination" underground and eager to join the heralded Mantlo Diviners, a group of similarly enabled teens. Yet, unlike the Diviners, Ade Patience doesn't see the future out of curiosity or good will; Ade gives himself concussions because he's addicted to the high, the Buzz, he gets when he breaks the laws of physics. And while there have been visions he's wanted to change, Ade knows the Rule: You can't change the future, no matter how hard you try.

His memory is failing, his grades are in a death spiral, and both Ade's best friend and his shrink are begging him to stop before he kills himself. Ade knows he needs to straighten-out. Luckily, the stunning Vauxhall Rodolfo has just transferred to Mantlo and, as Ade has seen her in a vision two years previously, they're going to fall in love. It's just the motivation Ade needs to kick his habit. Only things are a bit more complicated. Vauxhall has an addiction of her own, and, after a a vision in which he sees Vauxhall's close friend, Jimmy, drown while he looks on seemingly too wasted to move, Ade realizes that he must break the one rule he's been told he can't.

From Goodreads: "Braden Michaels wears his sunglasses at night. And at the movies. And in the shower. Raised by his warlock uncle and taught to use magic, he suffers from a deadly curse: the witch eyes. He sees everything that normal eyes filter out: history and memory; love and pain; magic and darkness. The mind was not meant to process so much information, though, and the power is killing him slowly. The only thing saving his sanity are the sunglasses he always wears.

Then the visions reveal a dark threat on the horizon. Braden runs away to Belle Dam, the city where the threat originated, and is immediately swept up into the town’s mysterious feud. Two rival magical families have divided the town into a personal chessboard of scheming and machinations, and Braden is their latest pawn. As he tries to avoid their manipulations, and see the truth behind his return to Belle Dam, he has a choice to make. One side, or the other. Ignite the feud, or end it. Sacrifice himself, or someone else. Live, or die."

What is on your wishlist?