"Once in a Full Moon" by Ellen Schreiber 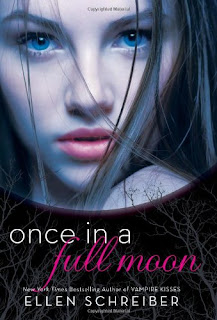 From Goodreads: "Beware of a kiss under the full moon. It will change your life forever.

Celeste Parker is used to hearing scary stories about werewolves—Legend's Run is famous for them. She's used to everything in the small town until Brandon Maddox moves to Legend's Run and Celeste finds herself immediately drawn to the handsome new student. But when, after an unnerving visit with a psychic, she encounters a pack of wolves and gorgeous, enigmatic Brandon, she must discover whether his transformation is more than legend or just a trick of the shadows in the moonlight.

Her best friends may never forgive her if she gives up her perfect boyfriend, Nash, for Brandon, who's from the wrong side of town. But she can't deny her attraction or the strong pull he has on her. Brandon may be Celeste's hero, or he may be the most dangerous creature she could encounter in the woods of Legend's Run.

Psychic predictions, generations-old secrets, a town divided, and the possibility of falling in love with a hot and heroic werewolf are the perfect formula for what happens . . . once in a full moon."

As I have mentioned numerous times I am the sort of person who cannot not finish a book series no matter how much I may dislike reading it/ no matter how many times I hold my head in my hands thinking to myself, "What in the world am I doing to myself?!?" and this is very much the case for author Ellen Schreiber's books. I was first introduced to Ellen as an author when "Vampire Kisses" (the first book in the "Vampire Kisses" series) was first released way back when. Since then I have read the other 8 books in the series. These books are possibly the most cliche-ridden vampire books ever and they contain everything that I hate about YA novels (love triangles, love at first sight, "I would rather die than live without you", overall mindlessness, and all of that jazz) but for some gosh darn reason I CAN'T HELP MYSELF! If I were to go to Chapters and see that they had these books in the bargain section for like $5/piece I would (without any thought) pick them up and buy then! So what does this mean? Ellen Schreiber: 1, Avery: 0.

Could you say that her books are my guilty pleasure? Totally.

"Once in a Full Moon" does not disappoint with Ellen's typical cliche-ness. We have a jerkface jocky boyfriend who doesn't appreciate his girlfriend until he is about to lose her, said girlfriend doesn't really have a personality and appears to be solely defined by the boys in her life (aka so that any girl could imagine herself in her place a la Bella Swan) and who happens to be torn when a second boy comes along and she feels herself falling for him DESPITE the fact that he is a complete stranger and she knows nothing about him (save for the fact that he is drop dead gorgeous).

Here are some of the most memorable lines from the story, in my opinion, which I thought I would share/ analyze:

Ummm... Celeste, you just met this boy and have had what? A total of one conversation with him? Plus... The boy whose name you keep writing over and over again? Yeah- he ain't your boyfriend! What would your boyfriend think of you writing some other boys name all over your stuff?

"Then he stepped out from behind the tree. Brandon's short wavy hair was now savagely wild and shoulder-length. His normally clean-shaven face sported a goatee. His once-smooth chest was now lined with a thin layer of hair. His stomach was as ripped as an Olympic swimmer's, and his biceps were cut like a triathlete's. His eyes were a gorgeous gray. He was breathing heavy, as if he'd run a marathon" (pg. 138).

Wow..."... stomach was as ripped as an Olympic swimmer's"? "... biceps were cut like a triathlete's?" Of course Celeste cannot help herself! Boy is one sexy werewolf! ;)

"My heart broke. I'd finally fallen in love, and I wasn't able to be with the person I'd fallen in love with. It felt as if he were being shipped off to an overseas boarding school never to return" (pg. 181).

This may potentially be the funniest line of the entire book. Oh the horrors! Being sent to an overseas boarding school!

Or hows about this little gem? What does it sound completely like? "Twilight's" infamous quote: "About three things I was absolutely positive. First, Edward was a vampire. Second, there was a part of him-and I didn’t know how potent that part might be-that thirsted for my blood. And third, I was unconditionally and irrevocably in love with him."? You bet!

All in all? If you are looking for a fun/ somewhat silly read then this is is a must read for you... I would recommend Ellen's books for to those occupying the lower ages of the YA spectrum or to those who love "Twilight", I think that they would really love them. Me? Not so much. And if you are looking for something more serious? Well, don't even bother with these.