Today I am ecstatic to be a part of the cover reveal of "Mortality" by Kellie Sheridan- I recently had the pleasure of meeting Kellie at the Ontario Blog Squad Meet-Up. Some of you may know Kellie as Joan of ARCs over at Spencer Hill and Kellie of ReaWrites. 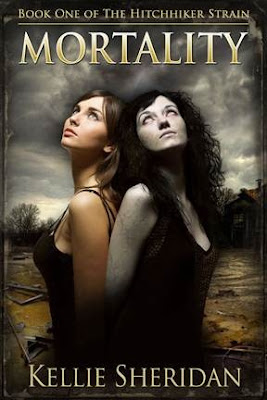 From Goodreads: "After surviving a deadly plague outbreak, sixteen-year-old Savannah thought she had lived through the very worst of human history. There was no way to know that the miracle vaccine would put everyone at risk for a fate worse than un-death.

Now, two very different kinds of infected walk the Earth, intent on nothing but feeding and destroying what little remains of civilization. When the inoculated are bitten, infection means watching on in silent horror as self-control disappears and the idea of feasting on loved ones becomes increasingly hard to ignore.

Starving and forced to live inside of the abandoned high school, all Savannah wants is the chance to fight back. When a strange boy arrives with a plan to set everything right, she gets her chance. Meeting Cole changes everything. Mere survival will never be enough."

About the Author: I have been in love with stories in all of their forms for as long as I can remember. Admittedly, sometimes that means falling into places like Stars Hollow and Sunnydale, but books have always been my true love. In early 2011 I began writing a book blog in order to share my favorite reads with book lovers. From there, the bookish community encouraged me to stop sitting on my own stories and share them instead. Since then I’ve been madly devouring everything I can about digital publishing, and my first novel, Mortality comes out in the Spring of 2013.

For the past two years I have been mainly obsessed with young adult books, but my favorite stories still come from the adult fantasy genre. As far as I’m concerned, Briggs, Bishop, Vincent and Vaughn are all must reads.

I spent part of my twenties living in Galway, Ireland and swooning after various lilting accents but am now back home in Ontario, Canada. My family includes two Glen of Imaal Terriers and a Green Cheek Conure.

Prizes: A digital ARC of Mortality (any format, sent to winner when ARCs are released), a paperback of As The World Dies by Rhiannon Frater, 2 zombie pins from Custom Curiosities (http://www.etsy.com/shop/CustomCuriosities?ga_search_query=zombie) and The Walking Dead: Days Gone Bye v. 1

a Rafflecopter giveaway
Posted by Avery at 12:05 AM