Cover Reveal and GIVEAWAY: "A Song For Julia" by Charles Sheehan-Miles

Today I am excited to be a part of the cover reveal of Charles Sheehan-Miles' "A Song For Julia"- Charles was kind enough to recently stop by the blog to tell us a bit about one of his other novels, "Just Remember to Breathe"! 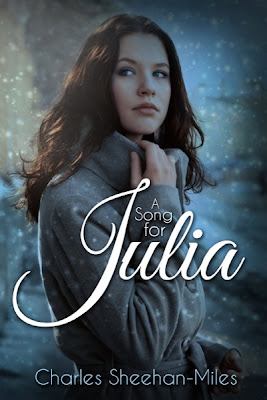 From Goodreads: "Everyone should have something to rebel against.

Crank Wilson left his South Boston home at sixteen to start a punk band and burn out his rage at the world. Six years later, he’s still at odds with his father, a Boston cop, and doesn’t ever speak to his mother. The only relationship that really matters is with his younger brother, but watching out for Sean can be a full-time job. The one thing Crank wants in life is to be left the hell alone to write his music and drive his band to success.

Julia Thompson left a secret behind in Beijing that exploded into scandal in Washington, DC, threatening her father's career and dominating her family's life. Now, in her senior year at Harvard, she's haunted by a voice from her past and refuses to ever lose control of her emotions again, especially when it comes to a guy.

When Julia and Crank meet at an anti-war protest in Washington in the fall of 2002, the connection between them is so powerful it threatens to tear everything apart."

About the Author: Charles Sheehan-Miles is the author of several novels including Prayer at Rumayla: A Novel of the Gulf War, Republic: A Novel of America's Future and college romanceJust Remember to Breathe.

Charles has been a soldier, nonprofit executive, short order cook, IT manager and run a restaurant. He doesn't believe in specialization. He is a former President and co-founder of the National Gulf War Resource Center and has served on the board of the Education for Peace in Iraq Center. Prior to becoming executive director of Veterans for Common Sense in August 2004, he was director of the Nuclear Policy Research Institute in Washington, DC. He currently works as a communications and outreach specialist for a law firm representing disabled veterans.

Charles lives in Bethesda, Maryland with his wife Veronica and their two children.

Charles will give a lucky commenter a digital copy of his first book JUST REMEMBER TO BREATE. Both books are stand alones, however some of the characters from JRTB are in A SONG FOR JULIA. Winner will be selected 12/07/12 via rafflecopter. a Rafflecopter giveaway
Posted by Avery at 12:00 AM