Today I am excited to be a part of M.R. Merrick's "Release" blog tour! Matt has been kind enough to stop by and tell us a bit about his writing process.

Everybody has their own style and method to writing, but I’m still trying to nail mine down. I’ve found something different that has worked for each book I’ve written, but doesn’t necessarily apply when I start the next one.

With Exiled, I had an idea in my head and I wrote until I’d gotten it out. As the series progressed however, that same method wouldn’t work. I put Chase, Rayna, and company on a big journey in Exiled, and I couldn’t expect myself to flounder through it for the entire series. For Shift I used a full outline. It veered off the path from time to time, but for the most part, it stayed committed to my original ideas.

Release is where things really started to change. I had a full outline written for the book, but I struggled a lot while writing it. The outline was there, the story was ready to be told, but it just wasn’t working. When I finally realized the outline was the problem, I fought with myself trying to fix it. That didn’t work either. The story didn’t truly come to life until I just let myself go and wrote. The truly major plot points stayed, of course, but the road to getting there changed drastically and in my opinion, it changed for the better.

I’m currently writing the final book in the series and I’m having trouble outlining even a little bit of it. I know everything that needs to happen, I know the plot points I need to close off, and the character arcs that needs to turn, but plotting seems impossible. I plot a few chapters ahead, but then I hit a wall, so I go back and start writing what I know I have to work on and then come back to it later.

The fourth book is the last book in the series, and writing this one feels like I’m tackling an entirely new beast. I realize now that it is. Each book is a different entity and as such, needs to be treated so. While some writers can plot everything before they write a word, others will never plot a thing. I don’t think either approach is wrong, but what I think is important is finding the approach that works for you.

I’ve realized that my style is somewhere in the middle. Sometimes I need the outline to nail down the details and put on paper exactly where I want to go. But in some cases, the story wants to tell itself. It doesn’t want me going into each chapter knowing the outcome. It wants me to experience it with my characters. And sometimes, that’s the approach that evokes the rawest emotions from me.

One thing is for certain, I no longer push one method or the other. When one route doesn’t work, I don’t stress out about it, I simply continue down a different path. I always start out trying to outline my novels first, but if it’s not working, I’ve found some of my best work comes from just “letting it all go” on the page. After all, that’s what first drafts are for. You can clean up any errors, fix plot points, and adjust character development at any point in your editing process. What’s important, first and foremost, is telling your story. If you don’t get it down on the page, you can’t edit it and turn it into something completely fresh. The first draft has no rules, so a writer has to take advantage of that. Just write, have fun, and take yourself on an adventure.

From Goodreads: "After uniting the shifters and calling in reinforcements, Chase has to face his toughest challenge yet: learning to control his emotions. But as tensions rise and his powers grow, controlling his emotions becomes the least of his problems.

Terrorized by a multi-shifter who is hell-bent on turning him, Chase questions just how far he’s willing to go to stop his father. Meanwhile, Tiki’s virtuous nature has placed him in the middle of Vincent’s past, leaving Chase to oppose a senate of vampires and defend a demon he hates.

Trying to balance his friends, his enemies, and his inner demons, Chase is left searching for answers about the Mark, his destiny, and where he can find the next soul piece. Stopping Riley is his top priority, but as more obstacles arise, he finds himself doubting all the decisions he’s made - especially regarding Rayna.

About the Author: M.R. Merrick is a Canadian writer, and author of Exiled, the first installment in The Protector Series. Having never traveled, he adventures to far off lands through his imagination and in between cups of coffee. As a music lover and proud breakfast enthusiast, he's usually found at the computer, between a pair of headphones and in front of a large bowl of cereal.


As part of the blog tour Matt and Valerie (from Stuck in Books) have prepared some AMAZING giveaways! 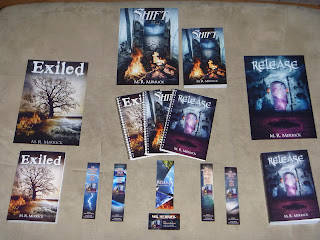 There will also be multiple opportunities to win signed paperbacks, signed posters, notebooks, swag packs, and bookmarks throughout the tour on both Twitter (@MRMerrick) and Stuck in Books's Facebook Page .


a Rafflecopter giveaway
Posted by Avery at 12:00 AM